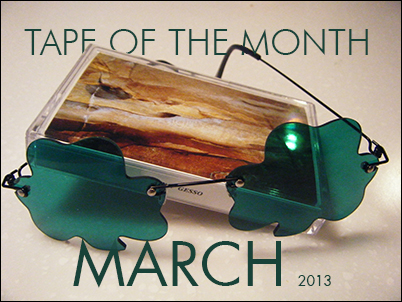 I’m amazed how much crazy good stuff has been released in the short amount of time since February’s Tape Of The Month. There were two damn fine batches from Canada’s La Cohu (Charles Barabé!!) and Fadeaway (Sundrips!!), some bangers on Elm Recordings out of Connecticut, and a self released debut from Ohioan Tiger Village that ya’ll should try to check out (what’s still available that is). All honorable mentions to the jam I’ve been playing over and over again for the last few weeks that was brought to us by Field Studies.

Chicago, IL imprint Field Studies has been providing one hell of a public service, that service of course being introducing me to artists that I have never heard of. Artist that come through strong I might add. The latest being New Yorker Alan Gesso and his 2nd release (as far as I can tell), “Obliscence”. I don’t know much about Gesso other than he has a previous cassette from 2011 on the label Natural Causes called “Idenity” (thanks, Discogs) and that he is self-employed and in an open relationship (thanks, Facebook). I’m not a stalker by the way. Just so you know. I just know about Google and really like this cassette. So….

“Obliscence” contains nine cuts, each a teleportation of paranormal vibes. The sounds are rich and crystallized when they need to be, dark and atmospheric when that’s called for, with shifting and blending used to mesh it all together. The opening track, People In The Stereo, sounds like a Halloween sound FX LP you would find at a thrift store, if that thrift store was on another planet and it’s inhabitants only heard about Halloween through third and fourth hand stories. It’s all very interesting, “Obliscence”, the entire 39 minutes. Gesso has these little tricks of throwing sudden changes of tempo or mood in places where they almost don’t belong, but also fit so perfectly. It’s weird. He’ll be jamming on a melody for a bit, bringing things into a comfort zone, and then lay a “womp-um” on ya, or make a quick speed adjustment before bringing things back to where they were. He does a good job of not hitting you over the head with these happy glitches, instead doing just enough to keep you on your toes. The soundscapes are way pretty and pleasant, but far from being background music. Let’s call it “Stay-Focused-Drone” maybe? Is that a genre yet? If not, I think Alan Gesso is doing his damnedest to make it happen. And he is doing it right. 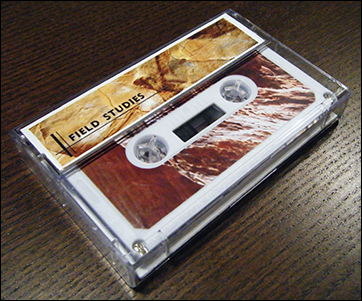 The JCard is three panels with the patented white spine with black text (in Garamond Bold Oblique) that Field Studies keeps consistent throughout their catalog. Each panel has a unique feeling while managing to maintain a consistent flow. We at Tabs Out had a minor disagreement when we played this on the show as to whether the second panel looked like a “profile of a dude holding his dong, but it’s censored” as Dave said (and Joe B agreed with), or the way more normal thought that it’s “some sort of body of land off of a map” that I chimed in with. It’s pictured above, so you be the judge.

Either way, it’s an impressive color scheme and layout. One thing in particular that I’m sure goes unnoticed by most noise-folk, but is a mega-commendable task, is getting that tiny 1/16″ border even around each panel.  Eric Hanss, head Field Studier, has a steady hand/personality and get’s it perfect every time. He cuts these things down by hand, which has got to be labor intensive. It’s not one of those fly-by-night jobs you see what cassettes all the time. We all have those tapes that look like someone took a pair of scissors or a paper slicers and just chopped away like Ray Charles clipping coupons. Hanss spends the time and get that shit right. Someone in Chicago, buy this dude a beer next time you see him out. He deserves it.

The cassettes themselves are white with a matching printed label on the A side only. Kudos for throwing that shitty band-aid middle part thing from the label in the trash where it belongs and not on the B side (or even worse: The Norelco!!). I’d rather see total blankness than the littering of that little piece of trash. I spit in it’s general direction. *spit*… I should calm down about that, but it really get’s to me.

“Obliscence” is still available for a mere $7, along with the other two releases from this most recent batch by Daniel Wyche and ZERFALLT (both burners). The Bil Vermette C40 from a bit back appears to still be around as well, so grab that if you know what’s good for ya, kid! 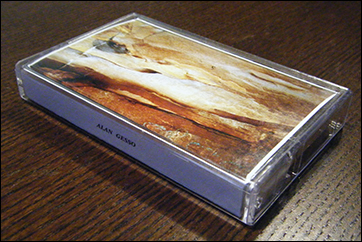 You can purchase a copy of Alan Gesso “Obliscence” from Field Studies.

You can hear a track on Episode #22 of Tabs Out.