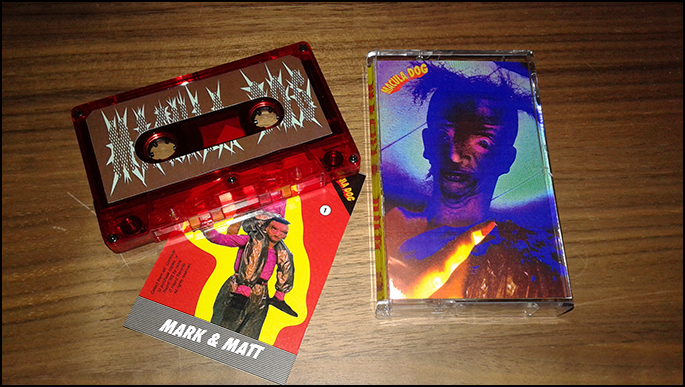 The people over at Haord Records are just like you and me. They wake up, eat some weird goo they found in NASA’s dumpster, and put on their octopus costumes one tentacle at a time. Okay, maybe they aren’t exactly like you and me, but that’s a good thing. Because being so “out there” as the kids say makes it possible for them to conjure up and distribute the most bonkers of bonkers shit. Example A: Last year’s 17-track compilation “Haord’s Buncha” which still turns me into a pile of wet spaghetti (and is still available!!). Example B: This brand spankin’ new self-titled slayer from Macula Dog.

Somewhere mushed between mid-century circus culture and no-questions-asked hobo orgies are the songs of Macula Dog. Essentially, this is pop music, but it rollerblades so far out on the horizon it’s not pop music at all. Don’t go into this tape trying to make sense of it (or your life) and you’ll have a blast. Tracks bounce from playful synths and way-cray rhythms chugging along in excitement, vocals crooning like a confused bank hostage to gnome-like loop creations, all with this sort of odd exactness. Like, you know each peculiar quirk or stimulating element is just how they (“they” being Ben & Mat of Haord backbones Tumbleweave and Drut PD) wanted them to be. The track Sumpter Or Save is a great example of what this tape is. Bouncy elements that are shaky and nervous are mixed with gluey, robotic repetition making a total fun house of sound. Get your tickets at the booth. There’s also a smattering of found sounds and/or rando recordings folded in throughout the cassette, each tampered with in it’s own way, letting in a noisy vibe.

Ten tracks can be found on this one, but it’s only a C20. All of this zoinkerness has got my taste buds raging for something longer, that’s for sure. This s/t offering is, by all accounts, a dangerous beast, but I need much MUCH more of this shit crammed into my ears. Oh, and the artwork for this sucker is just as nutso and tough to figure out as the music, and it comes with 1 of 4 Macula Dog trading cards. They’re no first series Garbage Pail Kids, but hey, what is? Pick this up from Haord now! Stream the album below and watch a video for the song Purchase Power-Station belower.