3.11.13: CASSETTE PLAYERS – PHOTOS AND TEXT FROM AUCTIONS AND SALES 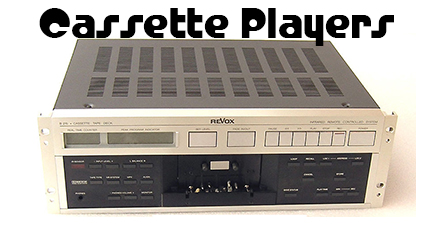 On Friday, August 30th, 1963 The Philips company first introduced the cassette tape at the Berlin Radio Show. In the 50 years since it’s introduction to humankind we’ve managed to dream up untold variations of machines to play these bad boys with. From the awesomely boutique to ridiculous novelties, everyone from Nakamichi to Nintendo got in on the game.

I have a nasty habit of purchasing every cassette deck, Walkman, and portable tape recorder I see at thrift stores and flea markets. Most of the time they don’t work, and most of the time I don’t bother throwing them away. I have a refrigerator in my basement with a jammer’s dozen (9 or 10) decks that either produce a gnarly warble or need to be tested. For whatever reason I just dig looking at them and going around my house on D battery hunts.

As it turns out Gabe Holcombe, the dude who runs Chicago imprint Lillerne Tapes, shares a similar attraction. He had the idea of “highlighting the history/weirdness of the cassette tape player/recorder”. To do this he’s created the extremely to-the-point Tumblr Cassette Players. As it says on the top of the site, Cassette Players is “No commentary, just photos and text from auctions and sales”. That’s it. A congregation of decks that, for the most part, people are just dying to get out of their basements or off the shelves at Goodwill. So simple. So amazing.

The site is hot off the internet presses. In fact, Cassette Players has only been active since this weekend (March 9th to be exact) but already has some gems to check out. Here are a few of my personal favorites so far…

Very stoked to see what pops up on Gabe’s site in the future. With all of the great, horrible, and great/horrible at the same time shit people decided to construct to play cassettes it should be a treasure trove. Follow it’s activity at http://cassetteplayers.tumblr.com. – MH