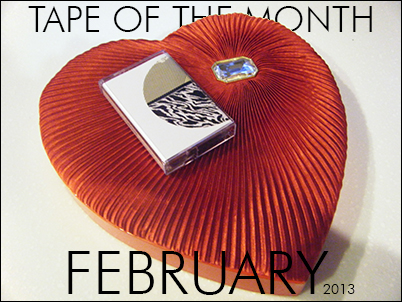 I scoped a gaggle of solid cassettes since January’s Tape Of The Month feature (ie: bangers on SicSic, The Centipede Farm, Fabrica, etc…), but the stand out in the crowd was definitely this 36 minute crusher on NNA Tapes by Belarisk. I’ve seen the name Belarisk in my journeys, but “On Amorphous Dawn” is my intro to Lee Edward Tindall’s work. Yes, he uses his full name. A choice that I feel is only appropriate for serial killers and Presidential assassins, but I’m gonna let Ledward (I’m calling him Ledward) slide because this cassette certainly does “kill it” as the kids say.

Belarisk, who resides in the lovely state of Rhode Island, is self-described “feelings” music. If the sounds that were constructed to formulate this cassette are a representation of Tindall’s feelings, then the dude must’ve been diagnosed with bipolar disorder. (Note to the artst: I mean that figuratively. If you really are bipolar, don’t take that personally and go into one of those bipolar rages on me). Laser-focused mood swings are the theme here as the cuts on “On Amorphous Dawn” undulate through an ocean of ideas. The jarring opening track “Portal Play” sounds like Mort Garson’s modem dialing up. Then, after a couple minutes of crunchy, rhythmic pulses, some harsh explosions, and an ambient soundscape or two, you’re jamming some new-agey hypnosis zones with panning squibbles (it’s a word, trust me) poking from left to right. This tape is seriously an eclectic mind fuck for the entire ride. Or, as Dave said on Episode #20 when we played it, “a nice grab bag of goodies”.

I wondered what gear Mr. TIndall used to create this nice grab bag of goodies. So I ask him. Here is what he had to say:

“For Belarisk, my setup has generally always been the same. For “On Amorphous Dawn”, I was composing on a slightly functional Ensoniq ESQ1, building sequences. Then I would run midi to my Akai AX80 as it is fully functional. Those would then combine as a stereo out running through a chain of delays/reverb & through a Jomox T.resonator. Firewire in to this hulking mass of a desktop computer I built a few years back. I used the computer more on this recording to compose the digital debris on ‘Portal Play’ & some of the wave editing/filtering/sequencing of the tracks. The program I used to record is one that I’ve used since I got a cracked full version back in the late 90’s. Can’t clue you in on it, but its VERY CLOSELY associated with Audition, now. There were some rogue reel to reel loops and cassette recorder loops used as well, the Rat pedal, old EHX flanger etc.”

One thing I adore about NNA Tapes (or Nu New Age Tapes if you’re nasty) is their commitment to aesthetics. I picked up the first couple of their releases at a gig I played with label heads Matt (A Snake In The Garden) and Toby (part of Oak) in Emmaus, PA when they first dropped. The half-circle images on the cover, color-matched artist names on the spines and NNA logo on the back flap. The hand painted labels on the shells that rounded out the whole package. It was all so sick. Now, was the Sun Circle / Pregnant Moon C40 blank? Yeah. Yeah, it was. But they replaced it and there hasn’t been a hiccup with this label yet. And they are still rocking that style five years later. The cover for this Belarisk tape didn’t catch my eye at first, but after listening to it a few times, it has definitely grown on me like a fungus. The circle artwork is split into two spheres. The top is a duo of mustard yellows with lines and scratches while the bottom is black and white squiggly lines that sorta look like a close of up John Olson’s text that you can’t really read right away. It’s sort of a great ying-and-yang, night-and-day, juxtaposition that makes awesome sense after you soak in the sounds. An accompanying insert, folded in half, contains all of the info. Another standard with NNA releases.

Check out “Cup of False Halogen”, the 2nd track on Side A

You can still grab this cassette direct from NNA Tapes for seven bones. While you are there be sure to peruse the back catalog, because you’ll find releases by Howard Stelzer, Hex Breaker Quartet, Rale, Drainolith, Doglady, Pulse Emitter, Caboladies/Oneohtrix Point Never,… I’ll be here all fucking day if I go on. Just get to it. I could be wrong, but it would seem that Belarisk only has two other releases out; “Untitled I” (C35, Fadeaway) and “Untitled II” (C34, Semata). Holy shit! It just occurred to me that Belarisk releases are 34, 35, and 36 minutes long. That MUST be on purpose, right? Either way, I think I like this cassette a little bit more now. 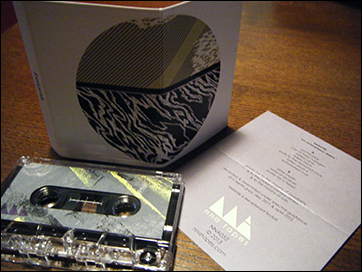 You can purchase a copy of Belarisk “On Amorphous Dawn” from NNA Tapes.

You can hear a track on Episode #20 of Tabs Out.