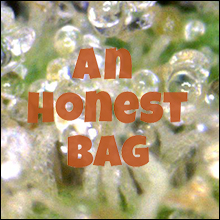 Imagine for a moment that you are a rodeo enthusiast with a sweet tooth. Or maybe you really are such a person, I don’t know your personal shit. Either way, under those circumstances, fantasize stumbling across a website deep down in the internet that reviews barrel races, and bronc busting, and shit where poor defenseless animals are tied up (or whatever those assholes do) AND it has pictures of mouth watering, medical grade donuts. You’d lose your mind, right? Yes, you would. Exactly. And that is what happened on my end when my browser ended up on the Blogspot known as Honest Bag. Honest Bag, conveniently run by Honest Bagger, is a review site of noise and experimental music, found mainly on cassette tapes. They also match up each review with a snapshot of a particularly succulent bud, courtesy of Humboldt Relief or Canni Corner. I don’t remember, but I think the Honest Bag site was introduced to me by Kevin Greenspon while he was on that super-extensive tour during the fall last year. I checked it out and immediately scanned back through all of the older posts, catching up on all the stuff I missed. The site seemed relatively young, but how it was never brought to my attention before is baffling and just proves that I have horrible friends. Obviously I would be way into this.

In a world of totally endless review blogs, most of which are stems and seeds, this Pittsburgh, PA based operation is one of the very few I frequent on a regular basis now. Does it have something to do with the fact that I love to stare at cassettes and weed?? I don’t really know, and I’m way too stoned to attempt to figure it out.  Plus, this isn’t about me. This is all about the Honest one, who was every-so kind enough to answer a few quick questions I had for him.

Tabs Out: How long have you been doing Honest Bag for now?
Honest Bag: I started Honest Bag one late night in November of 2011. It’s been running strong ever since!

Tabs Out: Was it just natural for you to pair up the tapes with weed, because that is what you were doing anyway? Or was there a process of figuring out something different to do?
Honest Bag: For years I wanted to write about music, but I’m an introverted person. Finally, I found the courage to start a site. I love music and herb, so I thought it was kind of natural to couple them. The name Honest Bag is derived from a conversation years ago with my good buddy. He once said to me, “Mike, I’ve never purchased an honest bag of drugs in my life.” The name Honest Bag was stuck in my head from that point.

Tabs Out: That’s rad. I love when names for projects have a good story/reference behind them.
Honest Bag: Thanks, man!

Tabs Out: How do you go about matching up the buds with tapes?
Honest Bag: Good indicas induce an all-body effect, which I think goes well with ambient music and noise. A lot of my favorite psych releases seem to work well with sativas. Hehe. I guess one can’t go wrong when pairing the sweet leaf with the beautiful vibes of music.

Tabs Out: I may be looking WAY too into this, but do aesthetics ever play a part? For example, the Innercity tape on Sloow and the Popeye bud you paired up look like they are supposed to be packaged together. Is something like that serendipitous or calculated?
Honest Bag: That was more serendipitous. Sometimes aesthetics play a part, but I think it is more about the feeling of the music and pairing it with a nice bud that gels with the music. Overall, I would say the feeling of the music dictates the type of bud with which it is paired.

Tabs Out: I notice you pretty much only review jams you’re into. Ever toy around with the idea of reviewing something you didn’t like and pairing it with some super dank, dirty weed?
Honest Bag: Hehe. I have thought about it. Due to time restrictions, I can only review 2 to 3 things per week. Therefore, I like to write about things that bring me great joy. Music that I would like to share with others.

It should be known that Honest Bag is not just some sort of novelty. One should not check it out expecting to see animated gifs of Rasta aliens with dreadlocks and sunglasses, surfing and giving a peace sign. The reviews are not sentence fragments, wingdings, and lines like “Aw, dude. Dude, guy… This tape is sick! This tape is so sick. Dude. Wait, what? #YOLO”. There are nice pictures of all the releases featured, inside and out. Covers, inserts, and the cassettes themselves are all well documented. The writing is to the point and interesting and a sound/video sample is almost always made available to scope. You can usually tell when someone throws up a blog because they basically just want people to send them free shit in the mail. They spew out a few sentences about how harsh something is or isn’t and slap a 2 out of 4 stars type system at the end. That isn’t the case here. As the man said/admitted “I acknowledge that I’m certainly not a professional writer or music critic. As I once told John Kolodij, ‘I may not be the best music critic, but I am deeply passionate about music’. I guess that is the thing I try to communicate in the reviews. The best part of starting this blog has been meeting people and sharing music”. In fact, barbequing the Devil’s lettuce doesn’t even play as major of a role as you would think.

Tabs Out: Is getting stoned a part of the process? Do you like to be high before you listen to/write about 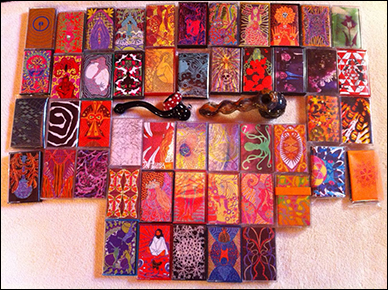 something?
Honest Bag: I guess the best answer is that sometime I’m stoned and other times not. Hehe… Usually later in the day is the best time for me. And I do not need to smoke before listening/writing. Sometimes it does happen, but the majority of the time I’m just listening to music. The reviews take a long time to compose. I usually listen to something at least 4-5 times before I begin a draft. I’m constantly taking notes, doing research. Given the abundance of sweet-leaf and herbisms that permeate the site I can understand that thought. The site is definitely influenced, heavily, by herb and consumption, but when I wake up, music is already moving through the room… And I’m not much of a waker and baker.

Baked or not, the dude is doing a sweet job talking about solid jams and introducing folks to left-field weirdness that may have gotten lost all up in the noise sauce. New labels and projects are constantly popping up at light-speed rates. And not just fly-by-night whammy’s, but truly unique, incredible imprints and jammers. Honest Bag is a helpful road map to get through it all, and a kind reminder that getting stoned and listening to tapes is a worthwhile past time. I asked him for a few recommendations.

Tabs Out: If you had to pick just ONE cassette label that has been killing it lately, who would it be?
Honest Bag: That’s a tough one because there are a bunch that are really lighting up the sky. Guess if I had to choose one, I would select Cosmic Winnetou. With each batch Guenter blows me away. From his second batch of tapes which were released last year the Sylvia Monnier tape was one of my favorite releases of 2012. And, already, the Kyle Landstra tape from the recent batch will feature on my end of year list. The Lunar Miasma tape from that batch, which is a reissue, is also incredible.

Tabs Out: How about busting a list of some highlights of the year for you so far?
Honest Bag: Sure!! I would be delighted!

Honest Bag recommends reading this article with the company of Bubba OG if at all possible. Be sure to check out the blog and follow him on Twitter. – MH