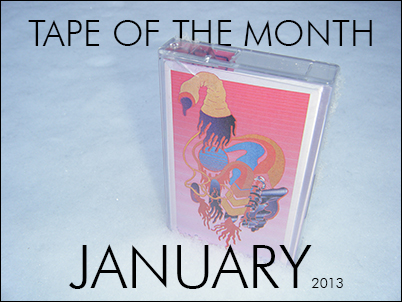 This year started off with a fucking bang as far as cassette releases go. Some great sounding and looking jams dropped right off the bat from labels like Tranquility, Rano, Cae-Sur-A, Rocket Machine, NNA, Baked and a bunch of others keeping the subject line “You sent a payment” littering my Gmail inbox. The label that really caught my attention though was Brooklyn-based Orange Milk Records. I have a small grip of Orange Milk in the collection, but the heavy scaffolding was put up for these latest guys, bringing shit to a whole new level. The entire OM batch is sick and includes tapes from Henry Dawson, Dozens, Piper Spray, Foodman, Weather Exposed, and the first ever Tabs Out Tape Of The Month: Lafidki “Absynthax” C30. 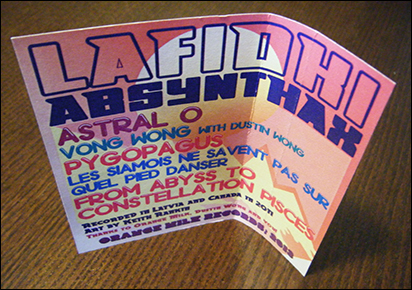 Ladfiki, the moniker of Saphy Vong, is not a name that I am familiar with at all. I’ve never seen it while perusing through online distros, review blogs, message boards, or any general dicking around on the internet when I should be doing more important things. That may be because “Absynthax” is apparently Lafidki first cassette release with a split LP with Orphan I Oliver and three compact discs being his only other output since 2008.

“Absythax” is a pro-dubbed C30 with five tracks. Each jam has multiple layers of arpeggiated synth lines, tropical warmth, and splenetic drum machine beats. The beats tend to come in out of nowhere, sounding totally raw, and juxtaposing fucking tightly with the smoothness gliding and pinging throughout the tracks My favorite cut on this tape has to be the second on Side A, a collaboration with Dustin Wong titled “Vong Wong”. Not just because the name of the track is fucking genius, but because of the “this will be music from one of the underwater levels of Super Mario Bros. in about 10 years” part about a minute in. It’s so intense I think I peed a little bit the first time I heard it. The jamage is well constructed to say the least. The artwork was handled by Keith Rankin (1/2 of the Orange Milk crew along with Seth Graham) and reminds me of something from Superjail!, that cartoon that is on from like 3:07am – 3:14am on Adult Swim. Or maybe a way psychedelic Woodist illustration… Something along those lines. The inside where all the track titles and various credits are listed looks like a rave flyer from the mid 90’s with a font that I’m sure is called Bubble Boy Thick or something. That font makes an appearance throughout most of the cassettes in Orange Milk’s latest batch and that’s probably the only place where it works. It’s totally one of those “so bad it’s good” sorta fonts. Dave Doyen described the background image on the inside as a menu screen from Tetris when we played this tape on the podcast. That makes for two NES references on a tape that is far from 8-bit. Hmmm? The shell itself is lilac with silver printing and has a sorta Stunned Records feel to it (RIP). Sick color combo for sure. One of those tapes you just wanna stare at for an inappropriate amount of time. As of right now it’s still available from Orange Milk for $6 ($8 international) so grab it while you can! 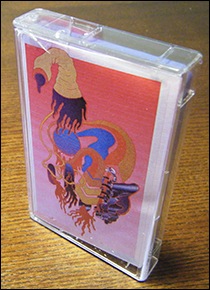 You can purchase a copy of Lafidki “Absynthax” from Orange Milk Records.

You can hear the track “Vong Wong” on Episode #19 of Tabs Out.