1.16.13: A Few Words Regarding The NO KINGS Process & A Downloadable Sampler 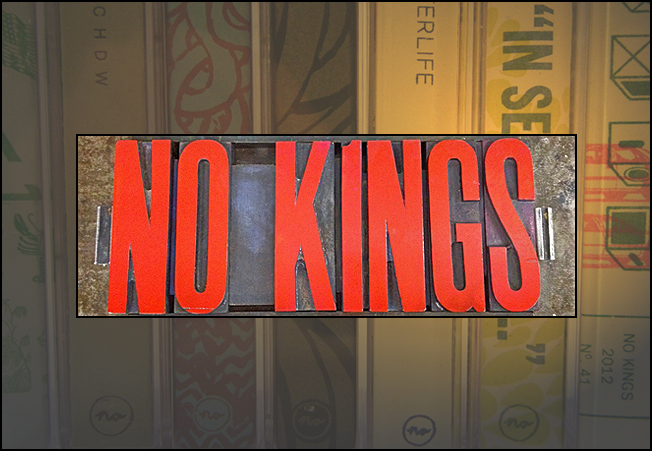 In addition to cassette tapes another (healthy, in my opinion) obsession that I have is printing. I went to a trade school where I studied offset/letterpress printing,  a shop that was mainly filled with dudes and dudettes who just wanted to smoke poopy, high-school grade weed in the darkroom and get an easy A from the old Polish dude who had been “teaching” the class since the school opened in 1970. The dude basically clocked-out a decade before I arrived but was still hanging around making inappropriate jokes to teenagers, sleeping in the ink closet, and listening to Willy Nelson on the regular. While pretty much everyone else could care less, I was straight consumed by every process in the printing world. A mega-light bulb could just burn an image onto some weird sheet of metal?!? And then ink sticks to it?!? Yeah right. It was alien shit, and you could do with it whatever you pleased. When I was a senior in high school and working in bindery at a print shop in the area I chopped off a chunk of my index finger on a gnarly dinosaur of a paper cutter. A machine that’s only safety feature was a sticker that had a picture of a hand under a blade with a line going through it (so don’t do that). It wasn’t exactly the worst injury in the world, but after it happened I still wanted to get back into the game. The next print shop gig I got was at a family-owned joint that worked with gear from a bygone era with serial numbers in the triple digits. It was all so primal, I loved it. (Fun Fact: The 905 Tapes logo is a scan of some linotype from that shop) All of that classic shit -The numbering machines that relied on gears and looked like they were made by Daleks. The huge spools of wire that ended up being staples that could go right through a cow’s tongue. Bars of iron that were melted down to make tiny backwards letters – it’s a dead scene. Today everything is mega-digital, way hands-off, and handled by a dude at Kinkos who doesn’t give a shit about shit except smoking weed in the break room (a dark… room??? what?). Then there is No Kings. No Kings is the polar opposite of that modern day mindset. When I first heard about this label, now operating out of LA by way of Tennessee (with a brief layover in NYC), I was drawn to them not just by the insane list of artists on the roster but the covers for their releases. The label is run by Lee Noble with help from a loose group of people back in Nashville. Lee did an internship at UNO in Koreatown, A letterpress print shop that focuses on spreading the the joy that is hands-on printing techniques. That’s where he cut his teeth on the letterpress and other classic print shop equipment and made the covers for early No Kings releases.

Without getting too bogged down in the process, letterpress printing is basically done by taking metal blocks with letters and/or images on them, locking them in place, inking them up, and then pressing or rolling paper against them. The pressure applied creates an end product that is totally unique. You can literally feel when something is done on a letterpress.  When you combine that with Lee’s amazing design work, well.. It’s fucking amazing. His art is an intense mixture of color and cosmic feelings with mid-20th century craft vibes. Even when it’s stripped down to the basics it’s still dazzling as hell. One tape in particular I’ve always loved is No Kings #16, a C38 from Andreas Brandal called “Realizing The Transparent”. It’s a jam with pink and green ink on a light weight, light blue paper with simple text surrounded by stock linotype. The kind of stuff that clogs up typeset drawers and is rarely used anymore. Lee said they were “a bunch of metal dingbats blocked up. The studio had purchased a random collection of type from someone a while ago that was in disrepair”. Stars, circles, bars, dancers, leaves, bugs, flowers, a “Postage Will Be Paid by Addressee” notification… Blocks most people would consider garbage and just toss out without even thinking about it, re-purposed to make a noise tape that doesn’t look like any noise tape I own. That is fucking poetry, man. And if you don’t agree then you’re pretty much wrong. Allow me to correct you. You’re wrong.

Another solid one is the cover for the Air Sign “In Search Of…” C52 (NK14) from 2011. It’s just a list of random words in even rows. A standard, unimpressive font with nothing else but a little speckling of yellow petals in the corner. Doesn’t sound like much, but if you could just feel it. Just get it in your hands on it and give it a rub down. I mean, I don’t want to come across as a weirdo, but holy shit. Somehow it’s perfect, and possibly the only tape in my collection that says “NAZI PLUNDER”, “DRACULA”, and “D.B COOPER” on the cover. What am I saying “possibly”? It’s 100% the only nugget I have that lists those words. And nobody else is EVER going to do it again. You might as well go to the boardwalk and get a “It’s a No Kings thing. You wouldn’t understand” sticker and slap it on that shit.

“I started doing the label again basically because I had access to letterpress and thought that would be a pretty unique option for a tape label. I can’t offer a ton of exposure to artists I release or any money or even tons of artist copies. Just try and have a really finished final item. That’s what i offer.” I gotta say it. With that quote Lee Noble is being a straight up modest-ass mother fucker. The attention to detail with No Kings, who’s name comes from some iron letters spelling out “NO KINGS RIB MEN” Lee and a friend found in a closed-down factory in Franklin TN, is about as absurd as finding  some iron letters that spell out “NO KINGS RIB MEN”. And when the dude say’s that he is into doing this, that it’s not just a hobby or passing phase sorta deal, I totally trust him. I get stoked that he is so stoked about the details. I asked him if he nerded out on things like paper and ink and he responded “I love that stuff. Looking at samples! Swatches!” This mother fucker said “samples! swatches!” Exclamation points noted. Now I’m not saying that you have to be in love with looking at blank paper and imaging what it can be, but if you do, if you are that kind of person, what you get is a resume like No Kings.

After leaving the letterpress studio Lee Noble did what is every red-blooded American’s duty to do. He made an impulse buy off of Craigslist. In late 2011 he purchased a risograph machine that now hangs out in his apartment and is used to make covers for No Kings releases, along with various poster and zine output with his lady friend Amy Fortunato. “I had no idea how to work it when i got it…” Noble said “…I had heard about the machines, and seen some printing so I knew the result was cool but never operated one. Emailed the dude and said “I’m interested”, and then I was going to meet him to look at it and then I was handing him money!” Without knowing how much green Lee dished out for the risograph I’m gonna say it was a solid deal! While Lee, to some degree, took his finger out of the letterpress pie he’s now baking that shit up in his apartment! It’s a level of DIY that would make Ian MacKaye blush if MacKaye possessed the part of the brain that explained how to blush (I think his is overloaded with scowling instructions). I asked Lee if doing this hella DIY as he does it is important to him or something that just sorta happens. He responded “It’s pretty much the entire point for me” which actually seemed pretty fucking obvious after he said it. I feel kind of stupid for even asking. We’re all presented with so many easy ways to do things anymore and usually take the easy way out. There isn’t anything necessarily wrong with that. Why would I snag this Gung-ho laserdisc out of the sleeve, plop it in the player, knowing I’ll have to flip it soon. And it may fucking skip or just stop all together. Instant viewing it on NetFlix is a few clicks away, right? So getting to the level No Kings is jamming shit at, that doesn’t just happen. You have to set out with purpose and passion, especially when you plan on sticking to your guns year after year as Noble does it up. 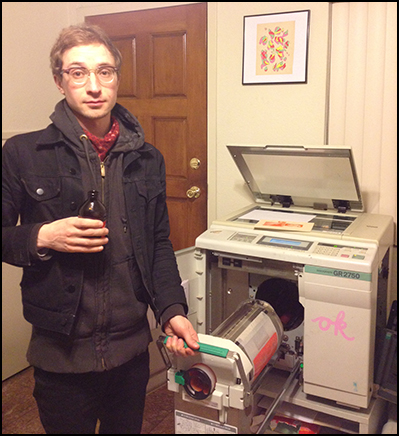 The imagery with the new setup is still brilliant and continues the classic letterpress look. The risograph process is similar to that of a mimeograph. The colors lay on top of each other rather than inks blending together as they do with other methods.  A nice example of this is the Derek Rogers / Sparkling Wide Pressure split (NK41). Four different designs were made for this tape and I’m just gong on the two that I have seen so let’s just assume the other two are just as killer, okay? Okay. The pink ink that lays on top of the green has a slight transparency to it. It’s a sweet zone to nerd out to if you’re into nerding out to such zones. The corners of the images are rounded on this one, but some of the actual covers get the round corner treatment throughout the No Kings catalog. There was a round cornering machine at UNO. That is one of the bonus gems of being around physical equipment on the regular that doesn’t present itself when you’re just plopped in front of a laptop. No matter how many Photoshop tutorials you watch on YouTube , even if they are like 12 minutes long and take forever to get to the point (disclaimer: they are ALL like that), you aren’t going to come across a hidden treasure of mushroom linotype or a machine that was made with the sole purpose of rounding off corners. It’s another world and I’m stoked that No Kings is living in it. It’s downright refreshing.

No Kingers have a habit of flying out the door so you gotta be quick. Seeing “SOLD OUT” on their site is pretty much commonplace. I’ve slept on stuff before and learned a lesson more than once. So I guess I didn’t learn a lesson…  A quick glance on the discography will show you that No Kings has dropped a cassette version of Leslie Keffer’s “Finally, Caves!”, shit from Afterlife, Hobbledeions, Virgin Spirit, Soothsayer, Trailing, Clearing, Ophibre, and of course Lee’s own solo material. Does it go without saying that I’m honored as shit NK released a Wether tape for me? If it doesn’t, consider me saying it now. 2013 Looks just as brutal with tapes from Inez Lightfoot and Motion Sickness Of Time Travel among those on deck. Stay tuned.