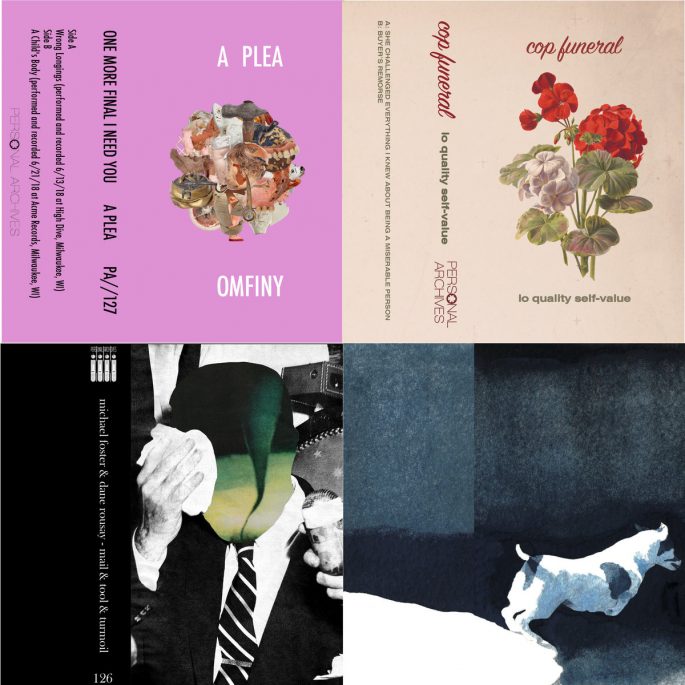 A hundred and frickin twenty-seven releases in, Personal Archives should be the name on the tip of everyone’s tongue when you start talking about longevity in the tape scene. (Already Dead notwithstanding – we’ll get to them in a minute.) So why is it that I have to keep reminding you with these posts, huh? Shouldn’t you have this down by now? Bob Bucko Jr. curates a strong stable of interesting and inventive artists, cajoling them to record and collaborate and mix it up a little, have some fun, hitch a ride on the back of a garbage truck when no one’s looking. Live a little, why don’tcha. Read these first, though.

Cop Funeral – lo quality self-value
This is who I was talking about: Joshua Tabbia runs Already Dead, and Already Dead runs circles around the competition for sheer release volume. But that’s not why we’re here – Joshua also records as Cop Funeral, a melancholy drone project that gives heartache its ambient soundtrack. Just look at the two song titles here, one lengthy piece for each side of the tape: “she challenged everything I knew about being a miserable person” and “buyer’s remorse,” each one playing spoiler for Cop Funeral’s mood with words like “miserable” and “remorse.” Sure, there’s introspective qualities there, glimmers of hope even, maybe, but if you’re stuck in a rut, look no further than Cop Funeral’s work. Actually, “lo quality self-value” itself is pretty descriptive, and if I’m being honest, you really have to squint to see that hope glimmer. But still, we’re here for the challenge, and as usual, Cop Funeral makes the passage worthwhile.

James McKain – The Detectives
I’m WATCHING them, get it? No, sorry, no more Elvis Costello dad jokes today, I’m too tired. I’ve been on the beat, see, staking out joints and following up leads. Shaking down suspects. Getting to the bottom of mysteries. Peering menacingly out from under the brim of my fedora. That’s what I feel like I’ve been doing all day when listening to James McKain’s “The Detectives,” a cycle of mournful solo sax that will make you turn your collar up against the wind and rain as you walk under streetlamps at night. No good reviewer will avoid the word “noir” in their writeup, because the film noir street vibe pouring from McKain is unmistakable. Take this smattering of track titles, for instance: “Even Angels Burn Out,” “Mott Street Breakdown,” “Aces,” “Some Real Soprano Shit, Buddy,” and “Alley Cats.” You’re there, right? In the story? In your imagination? If you’re not, “The Detectives” will help you get there.

Michael Foster and Dane Rousay – Mail & Tool & Turmoil
“YOU manipulate this object!” “No, YOU do it!” I can only imagine the arguments between these two, neither of them wanting to use the wood block or the junky old shaker they found in their parents’ basement. Nothing remotely like this probably happened, but you never know – what we DO know is that objects were manipulated, and drums and saxophones were played. I’m gonna venture that friendships were, in fact, maintained. Foster and Rousay’s recordings here exhibit the utmost restraint as they explore the space between their playing and the instruments themselves, focusing solely on the mood of the room – which sometimes necessitates bursting into dank bebop, of course. I love it when that happens.

One More Final I Need You – A Plea
“You who build these altars now, to sacrifice these children, you must not do it anymore.” Thank you! I was waiting for someone to say that, because it’s getting pretty ridiculous, people dying for ridiculous reasons (everybody’s somebody’s child). “A Plea” pleads (because that’s what pleas do) for sanity, all while illustrating the insanity we need the sanity to replace. Taylor Campbell (guitar), Landon Deaton (drums), PA label head Bob Bucko Jr. (tenor sax), and Eli Smith (laptop, electronics) pool their resources for their release as One More Final I Need You, colliding their combined expertise to explode out two live improv sessions. Their manic energy is infectious, and invigorating, even as they plow through tunes titled “Wrong Longings” and “A Child’s Body.” Obviously, OMFINY retains some dead-centered and rigid seriousness as they flail without abandon, playing off each other with intense glee. THAT’S the way you deliver a message.