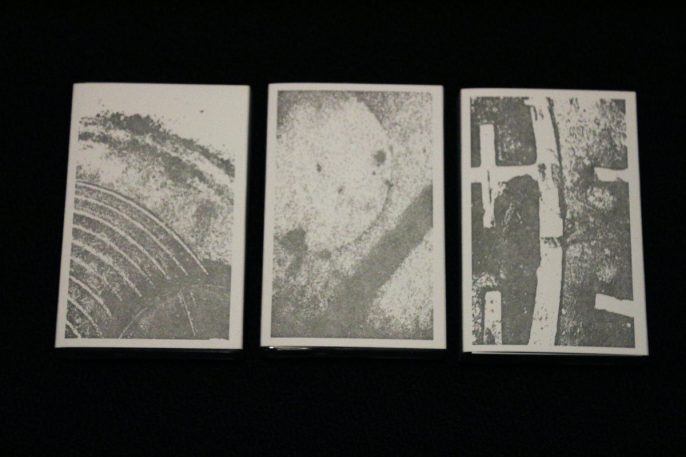 You might recognize Park 70 from their releases’ physical aesthetics alone: the Knoxville-based label drops everything enclosed in a lovely letterpressed O-card that includes a heavy card stock insert containing a replication of the outer cover art and additional information. The tapes themselves are clean and unadorned. Park 70 tapes are the very definition of minimal beauty.

I’m writing this at the tail end of November (you’ll read this months, maybe years later, I’m sure), so the time is still right to note that the Knoxvillains (haha, as opposed to Knoxvillians) have quietly slipped a new batch of their trademark wares into the world. You’ll not be surprised, then, that their sonic aesthetics also remain consistent, heavy on the serious long-form drone/noise/ambient and light on the jokey banter that you come to expect from us around here. I’m … sorry to disappoint you.

Sparkling Wide Pressure – Find a Frame
Another Tennessean, Frank Baugh has done his Sparkling Wide Pressure thing from the confines of Murfreesboro (where my brother lives, cool!) for quite a while now. “Find a Frame” continues his exploratory psychedelic ambient path, mixing snippets of found sound into a proto-vaporwave sludge that sounds like equal parts deconstructed noise and shamanistic desert jams. Meticulous and dynamic, sincere and weird, Baugh riffles through his inspirations and comes out the other end completely on his own terms. He even deigns to allow his own voice to be heard at times, giving “Find a Frame” a particularly personal feel. But there’s so much going on, and so much changes from track to track, that repeat listens are a must to pin everything down

Calineczka – The City Behind the Fence
Alicante, Spain–based artist Calineczka here presents “two miniatures on analog modular synthesizer” collected under the title “The City Behind the Fence” and dedicated to National Security Complex Y-12. Let’s … um … dig into all that a little bit, because there’s more going on here than the insistent drone Calineczka’s transmitting to us. First, these are not miniatures – each side presents a single 28.5-minute monolith of unfiltered tone. Second, the Y-12 National Security Complex is a “United States Department of Energy national Nuclear Security Administration facility located in Oak Ridge, Tennessee.” True, “The City Behind the Fence,” which is likely in reference to the facility, feels like it’s penetrating you at a subatomic level, so there’s probably some nuclear fission happening that you may not be aware of as you listen. Third – are there magnets in nuclear physics? This sounds like really powerful magnets if you think about it. If your head was made of metal, “The City Behind the Fence” would pull it apart.

Grant Evans – Ephemerals
What is it with these guys? Grant Evans is also prolific, with a generous back catalog that you can sift through after you read this and listen to “Ephemerals.” There’s so much music between these artists, it’s just unbelievable. On “Ephemerals,” Evans, like Calineczka, has produced two sidelong tracks, each a fifteen-minute slab of roiling, tactile noise. “Grave” recalls digging in the night, nefarious work, unholy activity – or maybe just dirty work, without the whole wicked connotation. Who’s to say? Who are we to judge? I judge “A Green Lampshade Beside the Door,” because that color just doesn’t go with the rest of the décor. Green lampshade! Not in MY house. The more you stare at it, the more you listen to its namesake cassette track, the more it begins to make sense, though. It wavers, emanating its greenness from within, seemingly dosing you with its lampshadey vibrations. Not in MY house, lampshade! Not in… my… house… I love you lampshade.