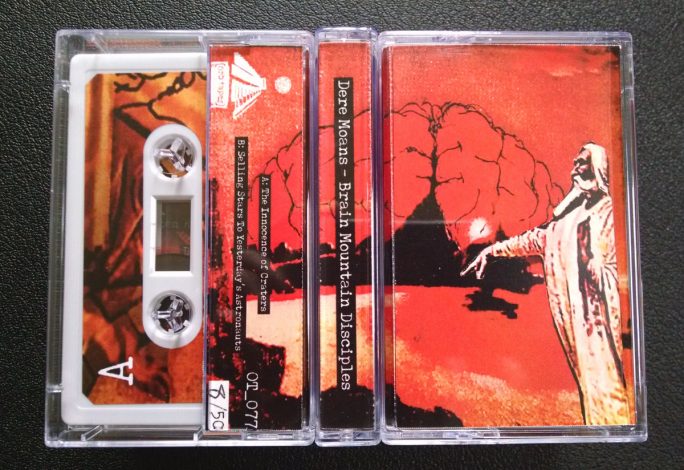 There’s a lot of great stuff to plunder out there, from jewels to gold to gold-encrusted jewels, but a lot of people don’t realize that there are more plunder-related activities than embarking upon a swashbuckling adventure to pirate’s booty. That’s right, did you know you can plunder SOUND as well? Well, you can. This so-called “plunderphonics,” a practice coined by some joker named John Oswald in a rum-fueled (probably) essay titled “Plunderphonics, or Audio Piracy as a Compositional Prerogative,” is, and allow me to “plunder” some words here from Wikipedia, “any music made by taking one or more existing audio recordings and altering them in some way to make a new composition.” Sounds highly illegal, and probably dangerous. But when it’s done right, the result can hit you right in the sweet spot and leave you feeling refreshed and fulfilled in ways you may be unfamiliar with.

Minnesota-based swashbuckler Dere Moans’ “Brain Mountain Disciples” just so happens to be one of those works of plunderphonic enjoyment. And since we’re off to such a great start with the description above, let’s allow Orb Tapes, Pennsylvania-HQ’d releaser of “Brain Mountain Disciples,” to continue from here: “[‘Brain Mountain Disciples’ is a] plunderphonics soup of old video game soundtracks, movie trailers, forgotten jazz obscurities, field recordings and jumbled midi drum sounds.” Oh, I thought so! Not only could I figure that out (I, too, thought of soup at some point), but I could also enjoy myself while doing so. See, I’ve watched a fair amount of movies and played a bunch of video games and listened to a heckuva lot of jazz, so hearing this stuff all jumbled together in a coherent and engaging way was a treat I didn’t see coming, and I’m over the moon about its actualization. Dere Moans whips together a crackling slurry of disparate source material into two sidelong slabs of constantly shifting sonic collage, at times smearing the atmosphere with gross digital brushstrokes while at others pinging breakneck impulses through the ionosphere. If that’s not a ringing endorsement of the Dere Moans way, then I should probably start looking for a new writing gig.

Seriously, that was OK, wasn’t it? Pirate gifs aside, of course.

Anyway, grab one of fifty copies from Orb Tapes – or you’ll be sorry!