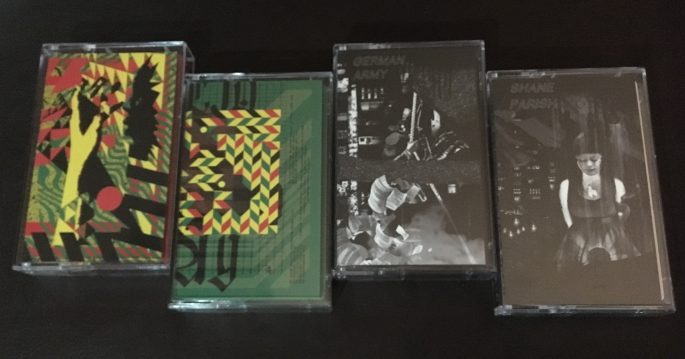 You turn your back for one second – ONE SECOND – and they’re at it again. Those damn kids, throwing stuff at your house, messing it all up. Like those \\NULL|Z0NE// kids – throwing carefully packaged cassette tapes at our open mailboxes like we’re targets or something. Targets! I mean, it was not one month previous that those whippersnappers tossed an M80 of a tape batch into the ol’ mail slot, and I was helpless to not write about it. You were helpless to not read about it, and you continue to be so as you click on this link and read it again. Well, I for one am not going to take this sitting down.

I’m actually going to take this reclining on my couch, if that’s cool.

Be forewarned – this is actually two batches rather than one, they just came out within close proximity to each other. \\NULL|Z0NE// is almost as prolific a label as I am a writer! (Actually, it’s not close.)

ADDERALL CANYONLY – Lucid in a Wasted Way
My favorite Adderall Canyonly tunes are the ones slathered in rich pink synthesizer goo and smeared as far as the eye can see in all directions across the landscape, changing the soil composition and the DNA of all the trees and plants and stuff it happens to coat. Weird then that “Lucid in a Wasted Way” begins with some lonely guitar, a portent of things to come? Yeah, there’s lots of geetar on here, but not to the exclusion of the fabulous synths. “Lucid in a Wasted Way” simmers along in a sort of melancholy futurism, the inevitability of science-fiction damage to our way of life a mere fact of pushing forward from one day to the next. The somewhat paradoxical idea evoked by the title fittingly describes the AC outlook: so sober and focused that everything seems like drunken blur because of its sheer irrationality.

LIFE EDUCATION – Psychic Yeoman
My favorite Patrick R. Pärk tunes are the ones that blast you so far into space you don’t know what hit you – all you can see are stars… either from the initial impact or because your trajectory has you on a collision course with the center of a galaxy. Weird then that “Psychic Yeoman” seems so inward looking, a portent of things to come? … What am I doing, parroting the AC review? Enough – this is low-key kraut of the highest caliber, introspective propulsion through the center of your being, pulsing ESP from one entity to the next. Pärk (and the Pärk Family Orchestre) trade outer space for innerspace, and “Psychic Yeoman” is a multicolored mind trip of major tie-dyed prog proportions. You only have to release your grip on conscious expectation to fully embrace the power of the eternal mind. So … just do it already.

GERMAN ARMY – Kowloon Walled City
My favorite German Army tracks are the ones that hammer home dank atmospheres with electronic tribal rhythms… No, no, what did I say before? I’m not doing that. Even though that thought’s completely true, I promised not to do that anymore, and I intend to stick to it. Now, where was I? “Kowloon Walled City” follows the German Army template, even finding ways to stretch out further and plumb heretofore unrealized depths of mood. They need it too – Kowloon Walled City was a fucked-up segment of Hong Kong. Just look at it! What the hell, man? People lived there, until demolition began on it in 1993. Not gonna lie, crime was pretty rampant. So yeah, creepy, otherworldly electronics, anime rhythms, eerie ambience, and industrial shudders mark this paean to a weird, unnatural place. Perfect for the German Army oeuvre.

SHANE PARISH – Child Asleep in the Rain
I … don’t have any preconceptions about a Shane Parish release, as this is my introduction to his work. Let’s all take a moment then to revel in the novelty of a newly unearthed artist, the adrenalized anticipation of discovery as you pop in that artist’s cassette for the first time. And let’s also rejoice at sheer attention “Child Asleep in the Rain” demands from you, its utter ability to block out any and all distraction as it lays itself on thick and magnificent. Parish, a guitarist from Asheville, North Carolina (and once a member of Aleuchatistas), allows “intuition” and “feeling” to “guide [his] work,” and the idea of letting go and allowing the composition to happen naturally gives the results a free and visceral feel. Parish states, “There is one infinite resource passing through seven billion finite filters of subjectivity,” and Parish-the-filter, from my point of view, channels it brilliantly.