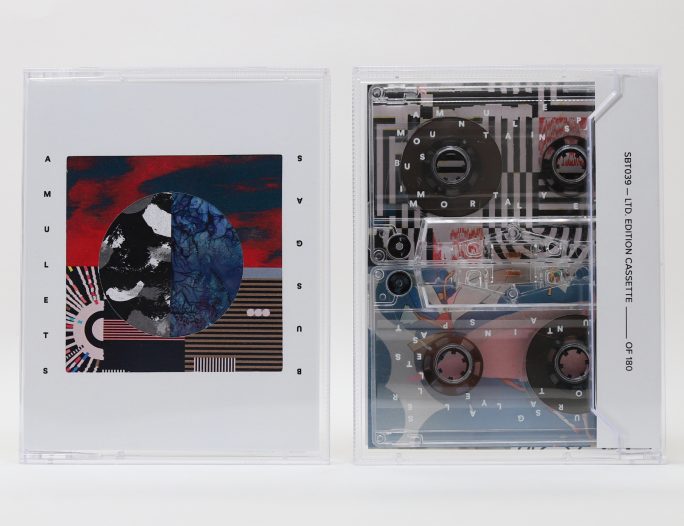 Two households, both alike in gritty ambience,
In fair Portland, where we lay our scene,
From ancient grunge break to new unity,
Where tape-loop’d sounds make playback heads unclean.
From forth the fatal loins of Spring Break flows
A pair of star-cross’d droners make their tapes;
Whose misadventur’d piteous overthrows
Doth with their co-release describe a nation’s soundscapes.

Shakespeare paraphrases aside, this new pair of jams might be better described as a tale of two cities. For many years, guitar- and tape loop-drenched cassettes drifted out of Austin as Randall Taylor’s solo project Amulets grew and developed. A day’s drive due north, a rotating cast of bearded characters in Lincoln, Nebraska were performing and recording as Bus Gas. In the last few years, both acts relocated to Portland, Oregon, where their paths would intertwine both geographically and musically.

The music on this “companion release” (a great way to describe a split that uses two tapes instead of splitting sides on one) would certainly make two fine independent releases, but Spring Break Tapes knows a good thing when they hear one, and there is an undeniable synergy found in bringing Bus Gas and Amulets together within one double-tall Norelco case. There is a shared approach to music, integrating live instruments and tape loops and processing to the degree that it’s sometimes impossible to guess the source of these pensive sounds. And the albums are further connected through a brilliant approach to artwork, designed by Bus Gas veteran Eric Nyffeler who combined images from 9 contributing artists, featuring a series of diecut panels whose fragments can be rearranged into new visual corollaries to the music.

The Amulets tape for this set, entitled “Mountains Past,” will feel familiar to fans of Taylor’s previous releases. A lot of the material is made from virtuoso-level manipulation of homemade tape loops, while synths create gentle pads and guitars sometimes rise through the surface ambience to articulate gentle melodies. Nobody is better than Amulets at making evocative, sometimes symphonic textures out of loops, while letting the grit and low-fi sounds of the machines working become part of the narrative. Some of the guitars, particularly on the title track, remind me a bit of Bus Gas journeys in the past, nicely connecting the albums.

For their part, Bus Gas connects right back to Amulets with an overall more subdued approach than their last few albums. “Immortal Yeller” is less post-rock and more ambient, with fewer guitar melodies and more emphasis on slowly-evolving textures and chordal work. Outside of occasional guitar arpeggio sections, it seems like guitar work here has either been rendered unrecognizable by effects, or transformed into samples that all three members of this latest lineup can deploy as needed. While synths and intermittent piano parts take a more assertive role, I must admit that my favorite pieces here still lean into guitar: “Hell’s Cape” has some heavy guitar playing that would be right at home on their last album, and album closer “Still Lifeless,” one of my favorite pieces in their catalog, takes on a tried-and-true post-rock shape, building to a climax about 3/4ths into its running time before coming to rest on some lovely fingerpicking passages.

It must be said that both Amulets and Bus Gas make perfect sense together as companions in a relatively uncrowded scene, somewhere between post-rock and ambient, gradually assuming the gravitas of minimalist classical influences. So many tapes that come my way fall relatively neatly into “modular blips” or “noise improv” or “synth zoner” camps, which is great, but these folks don’t sound like anybody else while being quite complementary to one another. Companions, indeed. I’ve long thought of both artists as lending themselves to a certain air of nostalgia, with their use of subtle noise, grit, and distorted/re-recorded materials evoking “aging memories” like fading photos and peeling paint, but I must admit to sensing an urgency in spirit now. In “these troubled times,” as it were, the stakes seem higher, trouble is looming around the corner, and I can’t help feeling like they’re exposing tensions and anxieties just beneath our collective contemporary surface this time around. But you’d best decide that for yourself: This double-tape sold out at source almost immediately, but you can still find copies at the respective Bandcamp pages of Amulets and Bus Gas right now. The release date is Friday, and you can still get in line for the zeitgeist.