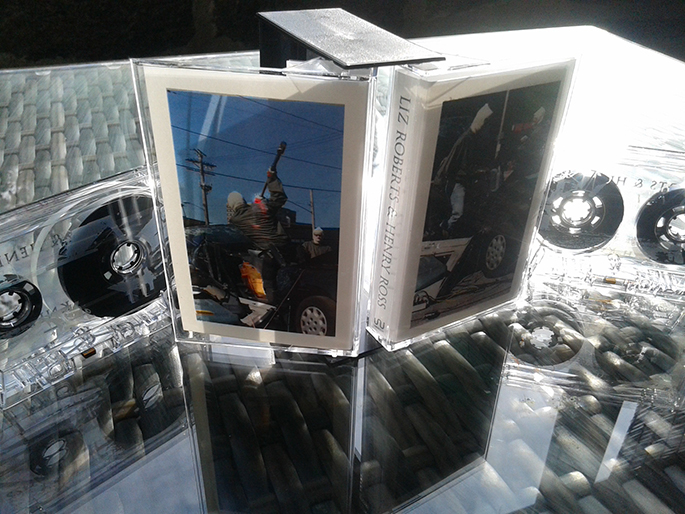 Liz Roberts and Henry Ross are living the dream. Well, my dream anyway – a dream of getting to dismantle a car, piece by piece, leng t’che via rotary saw and sledgehammer. Total destruction, for fun! And for art. Mostly for fun. Long have I desired to get my hands dirty and just shred whatever vehicle I could get my hands on – there’s just something about the slow carnage of ripping apart an automobile piece by piece that just gets me up in the morning. Is it the allegory to modern life and convenience that the deconstruction of such a symbol represents, the commentary on consumerism and capitalism that invites critical appraisal on such an act? Haha, not for me. For Roberts and Ross, sure. I just like the smashy smashy–ness of it.

But thanks to Roberts and Ross, I can now vicariously experience the disassembly I so long for without my neighbors calling the cops on me in their driveway. The duo “performed” “Death Knell” in the parking lot outside Transformer Station in Cleveland, in association with the Cleveland Museum of Art, and recorded the proceedings via seventy contact microphones positioned over the car and wired into an audio mixer. The result sounds exactly like you would expect – lots of banging and clanging and whatnot. But as the four sides (this is a double cassette release after all) and two hours unfold, the sounds become disembodied from the activity and take on a life of their own, redefining themselves within the scope of ambient and noise music by shifting the focus to texture and the insidious rhythm that intermittently appears. The further you allow your mind to drift from the central conceit, the less obviously “ripping apart a car” it becomes. That’s a neat trick.

Spoiler alert: the car dies at the end, its mangled metal body lying strewn at the feet of the artists-slash-insane mechanics-slash-proto-industrial musicians. So too does our perception of a lot of things, not least of which is the sense of how far one would go to fish out the change just dropped beneath the driver’s seat. There’s literally no limit anymore.

This double C60 comes in an edition of fifty from Unifactor, and it is al…most…gone. Get busy, or get bent.