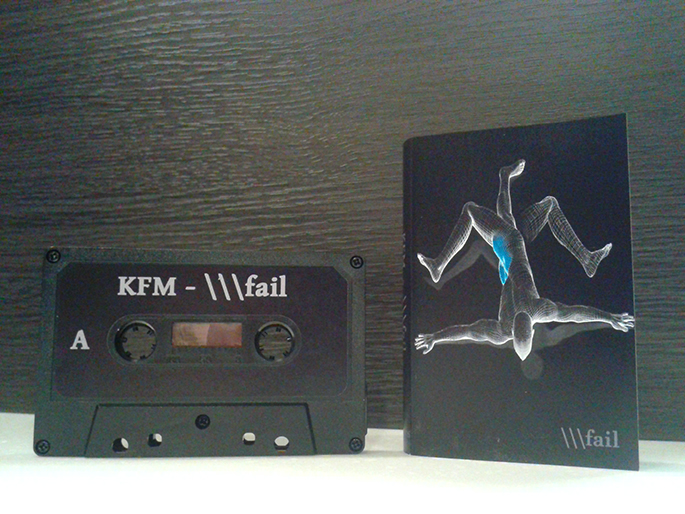 I don’t know much about computers. I’ve never seen the 1995 crime-drama Hackers, and the only thing I remember from The Net is when Sandra Bullock’s character Angela orders a pizza from the site pizza.net. I do have strong memories of playing, very well I might add, a game called Jezzball on Windows 3.11. That, and being reminded by my dad to constantly defrag. We were ALWAYS defragging. Maybe all of that obsessive defragging paid off, because I never had a computer shit out on me. I did manage to spill an entire cup of coffee into the works of my current HP, but technical support somehow managed to de-coffee all of the motherboards and had me surfing sites like pizza.net in no time.

It would appear that KFM has not been #blessed with such luck. “My piece of shit hard drive died, leaving me with these unfinished tracks.” That is how KFM describes “\\\fail.”  I suppose it’s far too late to contact any of the computer repair services in his hometown of Millville, NJ. I wont even suggest defragging at this point. What’s done is done and these 20 tracks have been put out into the world. So are they unfinished? I mean, there existence would suggest that they are finished, right? There is no going back to that piece of shit hard drive to collect whatever was on it. The tape is out. It is finished. But is anything really finished? I’d wager one could trot on over to a record store in Millville right now and pick up multiple variants of “Rumours” with contrasting remasterings, retoolings, and audio defraggings. Would you consider “Rumours” to be “finished?” Do you want to get high and have that conversation? No? Okay…

Now everyone defrag and head on over to pizza.net to buy a copy of this (un)finished cassette tape, which was made in an edition of 100 by the way.