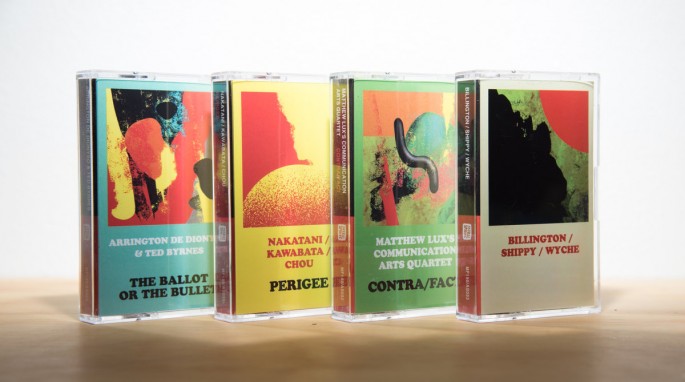 *Puff, puff, wheeze, wheeze* That run was killer! I can barely breathe … *gulp, puff* OK … phew … let’s do this… I am not in good shape like Arrington and Ted over there… I see you guys, all buff and junk… *pant* OK, I’m ready.

BILLINGTON / SHIPPY / WYCHE – S/T
Somebody scrape me off the wall, because Billington/Shippy/Wyche’s tape blasted out of my speakers and shredded my face. I was unsure what was happening at first – I assumed this release came from renowned British crooner Lord Billington Shippy-Wyche, but I was incorrect in assuming his dulcet voice would emanate from my tape player. Instead we get a guitar-guitar- drums trio, consisting of Mark Shippy (yeah, the U.S. Maple guy), Daniel Wyche, and Ben Baker Billington (yeah, the Quicksails guy). We also get a no-hold’s- barred improvisational set that’s bound to knock your socks (or, ahem, your face) off. The trio goes straight for the jugular and then the carotid, detonating a pipe bomb of serrated guitar and frantic drumming that virtually impossible to withstand. However, to suggest this onslaught is not only gripping but also enjoyable is not as ridiculous or far-fetched as it seems. Quite the contrary, dear chaps, the virtuosity on display is spellbinding in its acceleration, the pedal always to the proverbial metal. (I have a vague idea why I’m thinking in a British accent right now.) Then side B happens, and the spaces of “Norvin’s Fandled Submersible” (also probably the title of a song in Lord Billington Shippy- Wyche’s oeuvre) open up, and the textures and tones – oh, the textures and tones! – become more distinct. Each player is given more exposure to shine on their own, and they circle each other until erupting together in the tape’s ultimate passage. Now it’s time to phone the janitor (I have a janitor for my house) to do something about this mess. I’ll be fine, I’m a Christian.

ARRINGTON DE DIONYSO & TED BYRNES – THE BALLOT OR THE BULLET
Much like Billington / Shippy / Wyche, Arrington de Dionyso & Ted Byrnes grind through free improv jazz at peak performance, like athletes at the top of their game, endurance training while the “Record” button is pressed. Unlike Billington / Shippy / Wyche, Dionyso & Byrnes are only TWO people instead of three, and there are tenor and baritone saxophones and bass clarinet smeared all over this tape. (Byrnes plays drums, like Billington, so … same?) Since it’s scientifically proven that it’s harder for two people to do the same amount of work as three, THE BALLOT OR THE BULLET is a greater achievement and should thus be recognized as such. Because, again, science! (I don’t know what’s gotten into me.) Because I’m just kidding, guys! When you give me that look, it’s a joke. Let’s forget about all the comparisons and just let it stand that THE BALLOT OR THE BULLET, with a title like that and roots in a musical tradition rife with protest documents, stands as a massive monument of a middle finger to an America that just can’t get it right. Sorry to get all political here, guys, but c’mon, let’s stand for the anthem, OK? (Again, the look means joke! A joke, incidentally, I shamefully admit I stole from Mike Haley.) BALLOT/BULLET really is a just visceral reaction to the utter flaccidness of governmental power and how the majority of thE country feels about it. Wanna blow as hard as you can into a horn to get it out of your system? Dionyso does. Wanna pound on a drum kit till your fingers bleed and you can transfer your attention from your psychic pain to the physical? Byrnes does. Let’s take a cue from these guys, shall we? Channel that anger into something positive. If we all do that, maybe something good will happen.

NAKATANI / KAWABATA / CHOU – PERIGEE
Back to the trio with this one, but the heavy lifting going on here is of the cerebral variety. Whereas the previous two tapes in this batch reeked of athletic effort – the drenched pits and crotches of the players a victorious mark of vigorous physical exertion – ew, c’mon man – you’ve got to get in the three heads of Tatsuya Nakatani (percussion), Makoto Kawabata (guitar and electronics), and Henna Chou (cello and electronics) to experience the full power of “Perigee.” That’s not to say that Nakatani, Kawabata, and Chou each have three heads – that wasn’t clear at all in the previous sentence. Each has only one head, the three heads I referred to are the three heads combined in the compositional effort. It only SEEMS like each has three heads, because there’s the equivalent of three brains in each head, 3x mental processing power. I see how you could get confused. Regardless, “Perigee” unfolds with care, each player adding and subtracting elements with a deliberateness that appends the term scientific” to the experimental nature of these recordings. Because not a second or a sound is wasted – even when free improv hissy fit “Apsque” interrupts the otherwise tranquil process, there’s a control that’s evident. After so much sonic splatter on these other tapes, “Perigee” is a nice palate cleanser.

MATTHEW LUX’S COMMUNICATION ARTS QUARTET – CONTRA/FACT
Is “Contra/Fact” the hidden gem of this Astral Spirits batch, or am I imposing a narrative where one doesn’t belong? What constitutes “hidden,” anyway? Is it “hidden” because I simply came to it last, the final tape of four in this magnificent batch? Or is there some other characteristic that makes it a little less obvious than the others? I guess if you held the green j-card splotched with yellow, orange, and red up to certain trees at certain times of the year, it would be camouflaged. Maybe it’s because it begins so differently than the other three tapes here: the dash of Afrobeat and rumba on “Carmisa Sate” had me wondering if Matthew Lux’s Communication Arts Quartet was the second comping of Fela Kuti’s band! That’s a ridiculous thing to wonder, but the four-piece of Mikel Patrick Avery, Ben Lamar Gay, Jayve Montgomery, and Matthew Lux wander through some pretty enticing territory on “Contra/Fact,” from smoky jazz club stages on “C.G.L.W.” to, yes, even more vaped-out experimentalism (“Ninna Nanna”). “Paw Paw” might be my favoritest new jazz tune. “Colonial Gysins” is about as prog as these jazz hounds are going to get. I could keep going, and it doesn’t matter in the end whether this hidden gem is hidden or right out in the open – it’s still a gem, and I can’t get enough of it. Can’t get enough of any of these tapes, really.

As usual, these lovely tapes come in batches of 150 from Astral Spirits, and you can totally buy them all right now! And you should! Only problem is that you’re going to want to buy the back catalog as well, so make sure you have enough funds in your bank account before you follow any of this advice.