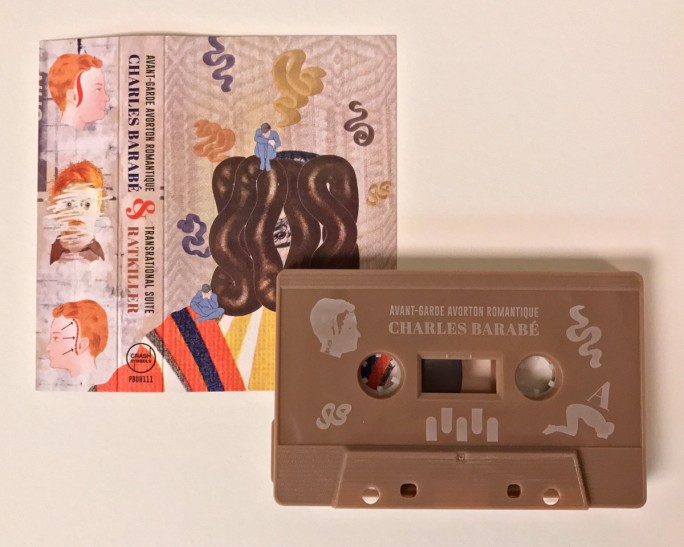 Alright, alright… If I’m gonna be 101% honest with the four or five people that read my cassette reviews (hi, mom!) then I should start off this cassette review by stating that I 101% knew I would be reviewing this cassette the moment I laid my baby hazels on it. For the lazy-player’s run down on why, here are some quick bullet points…

* Charles Barabé is a sound-genius.
* Ratkiller is a consistent maniac.
* Crash Symbols deliver the goods like one of those late-night munchies services that zoom Doritos and blunts to your door at 2:17 am.

Sooooo, the only way this pup was going to let me down would be if was accidentally dubbed over with dreamy bedroom pop or something. But even then, the artwork, with it’s Maurice Sendak having a bad week vibes, would get me by for days. Sooooo.

Barabé snaps into his side, “Avant​-​Garde Avorton Romantique,” like a rat trap, ironically. Channeling the brooding proclivity of dense soundtrack narratives, Chuck reassigns hunks of classical music and it’s kin into beyond epic sagas. As the timpani crashes with anger, reverberating around fever inducing cleaves of sound, you can almost smell gladiators prepping to do something raw and regrettable. The structure of it all is colossal, but also tangled by wormy synth sputters. A maze for your emotions to navigate. Over the last few years, with releases on labels such as Orange Milk, Tranquility Tapes, A Giant Fern, and many many more, Barabé has become less of a musician and more of a story teller. His techniques are basically copywrote. Stiff text-to-speech lines often reoccur to advance the plot. Perfected on his 2014 recording “Insultes (hommage à John Cage),” they are quickly heard here like HAL 9000 browsing a dating site while on the toilet. A syrupy “Communication is a huge thing for me. After a long day at work I just want to cuddle and watch TV and fall asleep” drains over a lethargic electronic rhythm. Everything stinks of confusion and suspicion and an uneasy joy. These elements under the steady hand of Barabé make it simple to close your eyes and drift into a previously non existent world.

I don’t remember where I initially heard Mihkel Kleis’ project Ratkiller. Maybe it was the “Cellar Dweller” tape on Rotifer? The point is I kept hearing Ratkiller because I knew it was the right thing to do. My instincts were confirmed by “Transrational Suite,” the name given to the five tracks on the flip side here. Kleis occupies the same real estate as Barabé – that is one where a whimsical jigsawing of romantic melodies takes place – but goes with a contrasting layout. On side A, where brick is exposed, Ratkiller hangs flowing tapestries. Where “Avant​-​Garde Avorton Romantique” glows high-watt neon bulbs, “Transrational Suite” relies on natural light to show off it’s slow-curved angles. But even with those soft color palettes and deep shag sounds, Ratkiller keeps peculiarity in mind. The track “An Attempted Dialogue Between Man and Fish” is a perfect example, where the normalcy and niceties of a guitar serenade are slowly leached by gurgling cloudiness.

Go grab a copy or two from Crash Symbols. And I’ll see you at Thanksgiving, mom!