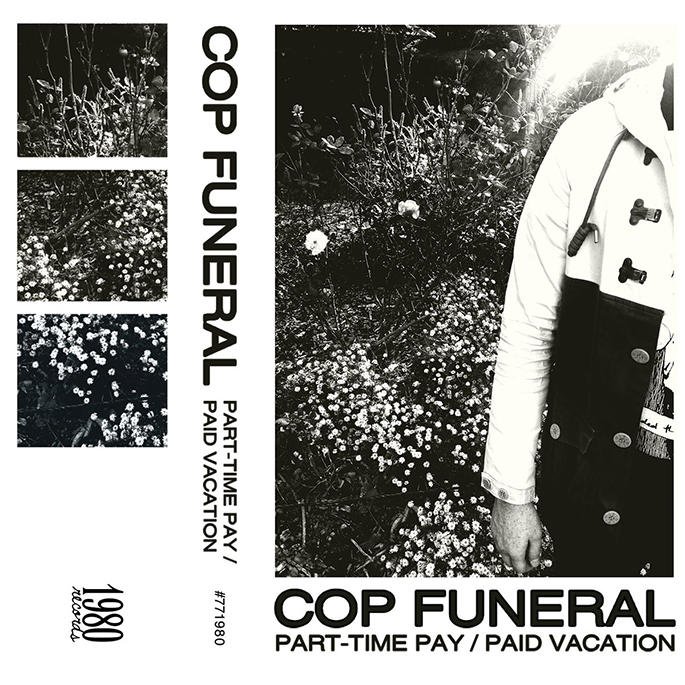 Josh Tabbia’s reflection on abuse – abusive relationships, abusive power structures, abusive employment statuses – isn’t as harrowing or terrifying as I had supposed it might be, which is a surprise. Think about it – psychological torture is pretty explicit and terrible stuff, and regardless of intention or intensity level, it should be the stuff that fuels nightmares and induces panic attacks. I am fortunate to have relationships with people around me that are normal and human—they are decidedly not abusive. I hope Tabbia has found an exit.

And while it’s not “harrowing” or “terrifying,” it’s certainly unsettling, but Cop Funeral has some sort of grip on general listenability that eludes many noise artists. Now before you get all huffy on me, note that “listenability” is relative, and is actually barely a criterion – your listenability and my listenability and the Tabs Out Podcast nerds’ listenability are all personal characteristics, so leave us all alone. What I mean is, there’s more than just dense, harsh texture – Cop Funeral’s all over the place, lasering tones and layering waveforms so your ears don’t exactly know where to focus from one second to the next. It makes for a gratifying listen from start to finish

Unsettling, yes, and tense. The opening triptych, “Limited Benefits,” “Part-Time Pay,” and “My Boss Vapes in the Bathroom” are variations on the restrictions imposed upon us in our occupational environments, and Tabbia tackles each idea with a similar approach albeit with varying operational touches. Sirens of anxiety wail before they’re roped in by general, pulsing, low-end dread, which evolves to allow the coexistence of higher-register tones so that, while they’re not at peak freakout, they’re on the verge of it at any given moment. It’s good stuff, and if something was eating at me, I certainly wouldn’t want to listen to this. But “7-3-16” is a calming track of water sounds and distant birds, and “Paid Vacation” ends the EP with twelve minutes of minor-key dirge, scribble lines of concern entering in the middle before resolving back to the dirge. It’s like when you’re nearing the end of a holiday and you realize the work’s piled up on your desk for you to dig through on Monday. Fun! Or, not fun at all. This is supposed to be vacation, dammit! “Coping and healing,” according to Tabbia, but still scarred.

“Part-Time Pay / Paid Vacation” is available from 1980 Records, and is currently in stock! Get busy getting busy.