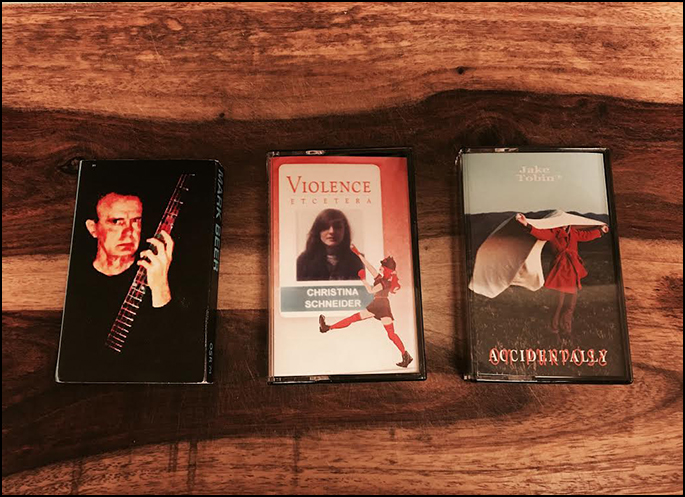 New York based multi-format label OSR is one of my favorite labels that I have run across in my years of writing about underground and DIY music. I was introduced to them through a cassette I received for review from the excellent Joey Pizza Slice, and I was hooked from there. They have an extreme dedication to releasing a staggering variety of weirdo jams, and an affinity for old school moves like xeroxed, zine-style catalogs, and a stated not-for-profit ethos. OSR feels like a slice of late 80’s international postal Tascam underground that has time traveled to 2016. Unfortunately, OSR is hanging it up after this latest batch of cassettes, LPs, 7″s, and books, but luckily for us there is a ton of it. I was able to sample a trio of the new cassette releases and none of them let me down.

First up here is a self titled release from UK artist Mark Beer, a prolific DIY recordist who has been at work in this field in some capacity or other since the late 70’s. This short, four-song cassette gives us a look at some of the old and some of the new, including two songs from this decade and two from the early 80’s. The fact that the songs hang together well speak to an element of timelessness Mark Beer has been able to achieve in his recordings. There are elements of pop or rock songwriting, but it is fractured, either buried under psychedelic abstraction or stripped down to it’s most minimal outline.

Next is an album called “Violence Etcetera” by singer/songwriter Christina Schneider. This is a beautiful/dark/shiny/light/heavy album of hazy, fine-tuned melodies. Schneider played just about everything on the album herself, with the help of a few friends here and there, into the warm circuits of a Tascam-488 in the time-honored tradition of lo-fi musical inception. The sound and method might be pure C86, but the complex, unblinking lyrics, full of visceral imagery, feel very timely. Another piece of evidence that OSR has an ear for sounds which might be able to transcend the moment of their creation.

Finally, we have the latest effort from prolific, eccentric multi-instrumentalist Jake Tobin, “Accidentaly on Purpose”. The musical virtuosity across a variety of instruments, the tightly composed twisting and turning rhythms and melodies, and the weird lyrics and attitude of the album immediately made me think this was like a lo-fi version of Frank Zappa. The influence of noise music creeps in a lot around the edges of these baroque jams as well, at times they descend into complete chaos. A jazz-like harmony of doubled horns doing a complex scale will be given a mechanical tape-slur, static descends, vocals are pitched to unnatural octaves. By far the least accessible release in this batch, but maybe my favorite.

Buy stuff from OSR here. Get it before it all sells out. If you miss that, get it digitally on their Bandcamp page.