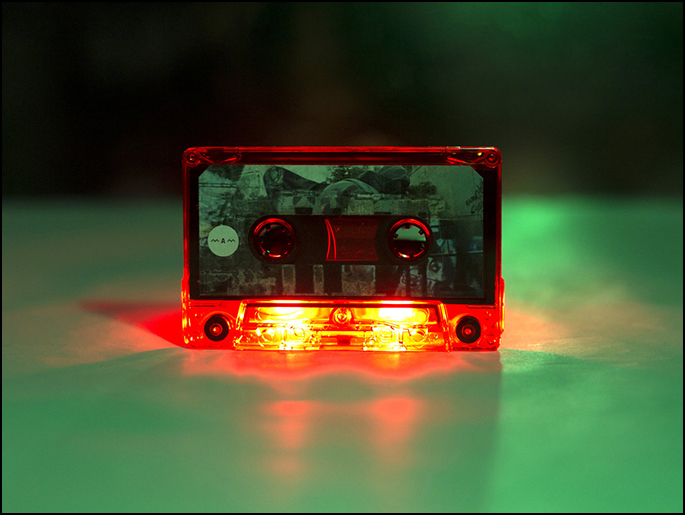 Released at the end of September from Prague’s Baba Vanga label, Sister / Body’s “Spells” is a fantastic distraction from whatever ails you. Sister / Body’s droney, industrial tracks feel like they’re coming at you from a deep tunnel of secrets and it’s worth jumping in.

I could hardly find anything about Sister / Body, other than that they’re from the Czech Republic and they have a handful of tapes out going back to 2008. The Prague duo’s ruby red tape features beautiful and mysterious artwork, like a hand holding a fuzzed out crystal ball, with a person’s hand holding what appears to be lotion on the inside, adding to the mystical, about-to-cast-a-spell feel. They open the tape with “Black Jacket Angel,” a fascinating track clocking in at more than seven minutes that puts equal importance on the sound in the song as the silence. Next up is “Darker Lover,” another spacey track with alien sounds and an obscured, deep voice singing over a consistent beat. “Spell” is the perfect title for the track closing out side A, as futuristic synth sounds wash over the slow, droney lyrics, pulling you into a trance.

Side B starts off with a female voice over vaguely alarming noises, bringing you right to the brink of a panic attack and then back, leaving the beat echoing in your ears; “Moon is Gay” bears little resemblance to the spaced out tracks on side A. I’d love to make a Johnny Cash “Ring of Fire” joke here, but the two tracks are so thoroughly different, I can’t muster one up. Sister / Body’s “Ring of Fire” is dark, growling lyrics over laid back beats, surrounding you in an almost-sinister sound. “Shadows” hails back to the side A, with a less-panic-inducing track to leave you relaxed. The song ambles through quiet and meditative beat with daze-inducing lyrics and an occasional, but not jarring, burst of metallic sound, ending the tape with a bit of fuzzy feedback before leaving you in silence.

Snag a copy of the cassette from Baba Vanga’s Bandcamp.