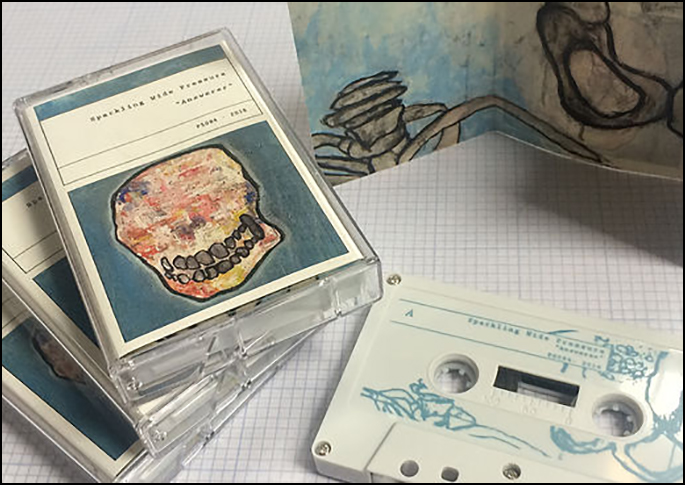 Sparkling Wide Pressure follows up his excellent tape on Cabin Floor Esoterica from earlier this year with “Answerer.” Released on Patient Sounds (intl) in late August, “Answerer” conjures up a sonic realm inhabited by acoustic and electric stringed instruments, synthesizers, organs, and looped up, talking background vocals. The A side, with its shorter, lighter tracks acts as the entrance way into this world Sparkling Wide Pressure have created for us. The opener “Deb’s Song,” with its loose, acoustic picking and muted electronics slowly guiding you in. The momentum gradually builds over the next three tracks, culminating in the A side’s closer “Current.” With its ghostly keyboards and spooky tones, this is the track that lets you know you have gone as far as you can go.

The album’s B side slowly begins the descent back. It is a slow and beautiful journey though. The side’s two longer tracks could be considered as focused as any on side A if they were split up into five or six tracks. Instead, each track simply changes direction every few minutes at random, as if taking the most zig zag route to get to where it is going. That is not to say these songs are aimless, but rather so full of ideas that an efficient route to the end is not necessarily the goal. The closing “Turning You Into Me” is the tape’s highlight, containing both its darkest and most optimistic moments within its nine minute running time. A jangled melodica solo running over a looped up robotic voice until this fades to give way to an almost sunny electric guitar before turning again into a cryptic closing piano part. The whole time using subtle electronics and synth washes give texture to an already deep sound.

Overall, “Answerer” is a fascinating journey. Sparkling Wide Pressure’s mixture of traditional acoustic and electric instruments with loops and found sounds is in top form here. Its not just Answerer’s brilliant use of acoustic and electronic instruments that is most impressive about it, but rather how perfectly blended together these instruments are. Over the course of the album’s forty minutes not one note or noise sounds out of place or overstated. It baffles me that an album can sound so spontaneous yet so planned at the same time. It has made me want to journey into the concoction of sounds this album inhabits on a daily basis.

Copies are still available via the Patient Sounds shop should you care to take the journey too.