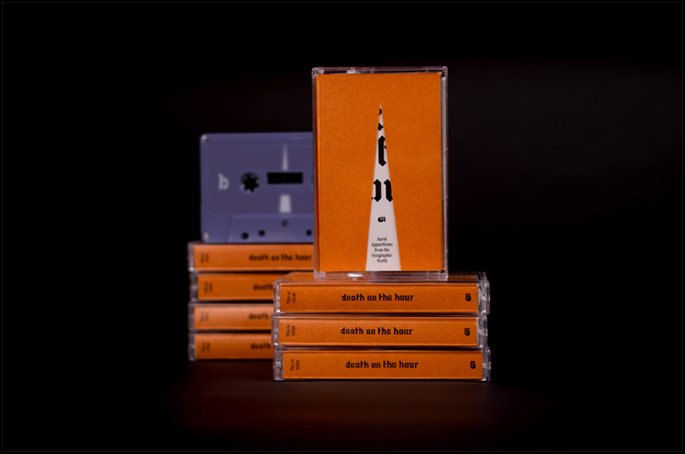 1) Eating all of my kid’s candy the night they get it and telling them a Frankenstein broke in and stole it.
2) Juice Demons.
3) Geographic North‘s “Death On The Hour” cassette compilation.

“Death On The Hour: Aural Apparitions from the Geographic North” is fueled by spectral atmospheres. Focus is averted from the trick-or-treat and pumpkin carving conditions of the holiday and fixated more on the idea of spending the night in the vacant house that Old Man Wallmaker hung himself in on Halloween night 6 years ago. I’m talking classic horror movie patterns, reconstructed as an experimental cassette comp.

Moses Archuleta of Deerhunter cracks open the door with a track from his solo project Moon Diagrams. No stranger to the GeoNo fam – his “Care Package (Sketch For Winter IV)” was released on the label in 2015 –  Moon Diagrams’ opening cut “Omegaplex” is a relatively lighthearted start. But that’s how these things always begin, right? After all, you aren’t worried about crashing in Wallmaker’s Victorian style pad in the least.

But that feeling doesn’t last – you’re only human – as the next couple of tracks creep in. Landing and M.Sage go séance-style with covers. An eerily patient John Carpenter take and Screamin’ Jay Hawkins’ “I Put A Spell On You” disguised as muddled verbal fragments disoriented in a sound-smog, respectively. Sage, who runs the Patient Sounds label, whacks the Halloween motif with a witch’s broom, crawling into a rather itchy zone. Ekin Fil, the below-fi workings of Ekin Üzeltüzenci, instills confirmation that there is no running water, no lights, no cell reception with salves of ambient gaze. Thoughts that are later echoed by menacing stretches from Auburn Lull, Kranky’s Windy and Carl, and the closing credits drone of Lyonnais, the comps longest burner at nearly 14 minutes. Shadows start to fuck with your psyche and you start goosebumping. We know what happens next, right?

The gang shows up! The gang, played here by Leech (Brian Foote of Nudge, Fontanelle) and Jacober, knew it would be hilarious to half-spook ya and bring beer, flashlights, and a boombox with some peculiar hang-jams. Their winged rhythms and adult bevs get ya out of the slither station, but only about 45% or so. I mean, the rope Old Man Wallmaker used is still hanging there. But yeah, what a great bunch of friends you have. Now, in true horror movie fashion, everyone splits up to explore / make out because nothing could possibly go wrong.

Bad idea (duh). Turns out Old Man Wallmaker faked his death and has been hermiting out in the basement with enough old Joy Division bootlegs and poppers to last him years. You would have known that if you listened to TWINS and The Flag before acting a fool. Wallmaker takes to your throats with a rusty screwdriver. Now you’re dead and can’t order “Death On The Hour: Aural Apparitions from the Geographic North”, out now in an edition of 100.