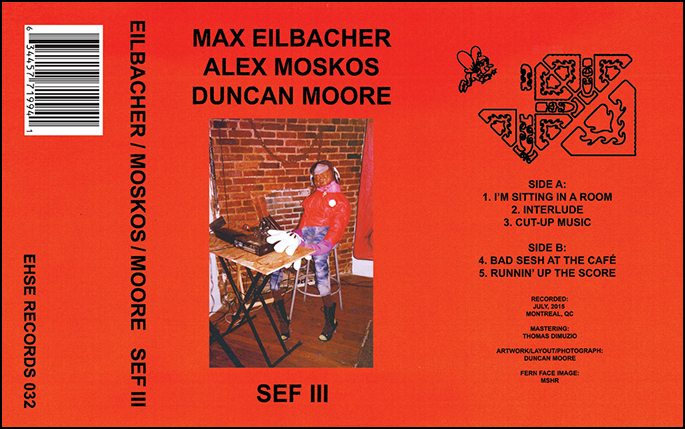 SEF III is the trio of Max Eilbacher, Alex Moskos, and Duncan Moore, who all play in other projects like Horse Lords, and Drainolith, and Headband. But for this one they play together as SEF III. Or maybe by SEF III? Or maybe “SEF III” is actually Eilbacher/Moskos/Moore playing SEF III? It’s unclear just what the group name is, as the tape and Discogs both state the artists’ names, but on a recent tour they played under the name SEF III… A nebulous space created between the creators and their creation. Phil eludes his shadow.

From a session, or sessions, in July of last year the trio use tape elements, modular synth, poetry, collage, other sound generators, probably other stuff too, and a playful sense of disorganization to spin you around in a dizzying sense of disorientation.

The structural layering is so DEEP across the whole release, like one of those yummy 7 Layer Dips that they just bring out in the casserole dish it was made in cause there’s no possible way to transfer it without it falling apart. And you can make out the top couple layers for sure, maybe even a middle layer or two, but you’re gonna want to reach that WHOLE chip in there and scoop up every little piece. Soliloquies on spontaneous clown generation, slowly transitioning into a mechanic relay stream of consciousness. Peppered blasts of frequency modulated nodes. Slippery lilts trigger the resonator squelch. Claustrophobic foot step rhythms. Real tasty stuff.

“SEF III” is released on Ehse Records of Baltimore, MD in clear gray shells and housed in a red-orangeish j card. No stream/download available so grip and dip!