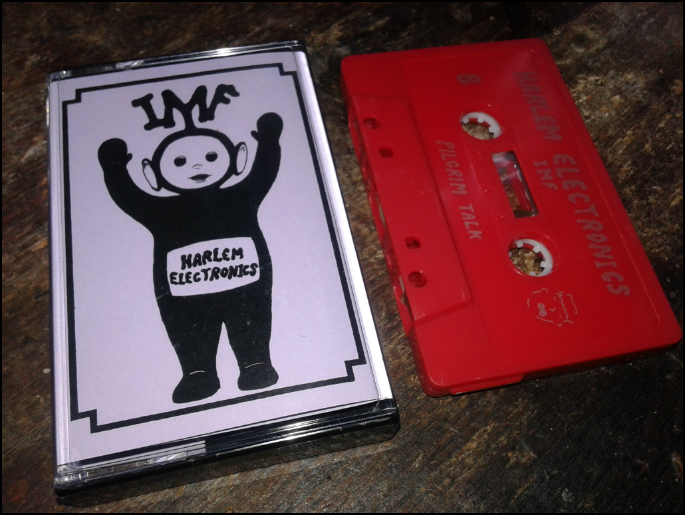 Friends, I went to a dark place. I was only there for about an hour or so, probably less, but it felt like a damn eternity. That lurid terminal was the Teletubbies Wiki. I’m old enough to have not watched Teletubbies as a kid, but young enough to be aware of their existence. So I was able to immediately recognize what the cuddly buddy was on the cover of IMF’s “Harlem Electronics” cassette, released in an edition of 100 copies by Pilgrim Talk. Still, I wanted to know more about them, so off into the internet I went… I can’t get that time back. What piece of important information fell out of my brain to make room for knowing who the youngest and smallest Teletubby is, I may never know (Spoiler: It’s Po). The only way to get out of knowing that, and what happens when The Teletubbies enter their Tubbytronic Dome and the Magic Windmill starts to spin, may be a swift kick to the temple by a horse. Sigh.

That’s neither here nor there. Knowledge of those cotton-stuffed suckers is not needed to enjoy “Harlem Electronics.” Association ends with the cover. IMF offers nothing to snuggle. IMF is all about discombobulated shots of relentless noise. Noise created by, or not created by, Ian M Fraser. I say not created by because the liner notes state that “this program performs with no human interaction whatsoever”, IMF opting for algorithmic, computer rendered compositions. Human interaction or not, this tape gashes into existence with unsettling, wavy coarseness and grating randomization. It bolts through an audible brick-and-mortar melee, scrambling streaks of feedback like a malfunctioning machine attempting to fix other malfunctioning machines. No machine is restored to factory settings, though. Instead there is a further soiling of an already exacerbated, oil-stained workplace.  IMF is more of an executioner than a mechanic I suppose, and the causalities on “Harlem Electronics” put most pedal pounders to shame.

This was the swift kick to the temple that I needed. My brain is officially reset. I will go on.