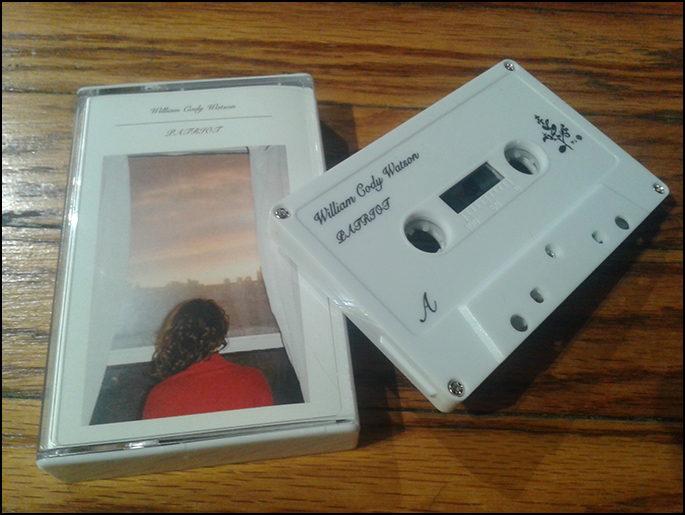 William Cody Watson (aka WCW, fyi) has been casting a wet shadow deep below the surface of the underground for more than a few years now. Various solo projects (Pink Priest, Gremlynz, Malibu Wands) and duos (Wild Safari, Virgin Spirits) have seen releases on No Kings, Night People, Bathetic, Sweat Lodge Guru, Different Lands, etc etc etc. His latest concoction is a bombed out C46 recorded a handful of years ago from Lime Lodge, the labels fourth release and first cassette.

“Patriot” is like a fairy tale. One of the classic cuts. The dark as fuck German shit where parents are constantly dying. Nothing sugar coated or CGI’d. “Patriot” is actually worse than the Brothers Grimms’ yarns, because “Patriot” starts off with everyone dead. Well, not EVERYONE. The listener is functioning. And maybe a few talking snakes and grey scale mushrooms. Other than that, no life. Just drones. The drones are heavy. That’s the easiest way to say it, to be honest. They’re like the sound of a brown paper bag blowing by you, filled with dark matter and bad voodoo. Filled to infinity. It blows down two overlapping paths that lead to opposite edges of a dank spectrum. You limp down the paths with blinders on (if you were a horse they would shoot you). WCW wont shoot you though. At least, I don’t think he will.

About halfway through End Of Hiding, the lone track on side A at 20:00, the blackness becomes polluted with an illuminated glow of hope. Embedding itself into the bleak ether, more encouraged layers of sound besmirch the stern posture of the track with thirsty optimism. But the glass is not half full. It’s overflowing with venom. The track continues to crumble, crack, and corrode.

Always Bleeding picks up side B in a similar fashion, only now it’s raining. And maybe you’re wearing something tie-dyed. Not a shirt or anything over the top. Something subtle, like socks. Synth runs are trapped in a clay-like recording on side B. Like a big, dumb grizzly bear hugging a crystal ball. It’s a beautiful, muddy, volcanic piece that inflates with tension. Exhaustive and exposed stretches of caramelized audio evaporate after a bipolar struggle. Fuck.

“Patriot” is limited to 100 copies on pro duplicated cassettes with outstanding artwork. Indulge, my friends.