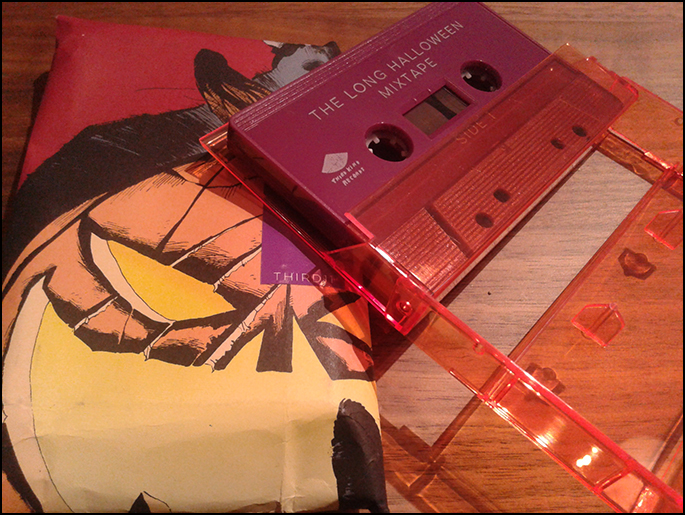 Halloween can be a scary time. Hell, some might even say #tooscary. But if you’re the kind of person that can get down with spooky goblins and skittering critters, then Third Kind Records has the tricks and treats for ya. “The Long Halloween Mixtape” is a 105 minute (that is quite long) compilation wrapped in pages from the graphic novel of the same name. The tracks aren’t necessarily Halloween themed. You wont hear any haunted house sound effects or witches cackling, but instead an unbelievably tight curated mixture of experimental sounds. Much like a post trick-or-treat sack that contains everything from a razor blade cloaked in a Fun Size Snickers to carrot sticks.

Present on this 20 tracks monster are a few Third Kind veterans; Nicholas Langley who runs Third Kind with Molly Askey-Goldsbury, appears in a few forms, including collaborations with Ian Murphy. Wrong Signals. who released the satisfying “However, The Joke Became Serious” C40 last year, provide a fresh track plus one remixed by Fisty Kendal (who also give up a couple of cuts on this comp. Fisty also released a Third Kind tape alongside it). And a double dose from New Zealand’s Reflex Condition. The lineup is rounded out by names previously unfamiliar to me, but better late than never.

Not only is there no Halloween-theme on this Halloween mixtape, but there is also absolutely no marriage to genre either as the compass needle whirls for over an hour and a half. Concept Devices‘ eight minute opener might be the closest representation to a creepy 10/31 vibe. But as soon as you’re thoroughly coated in dank and malleable spans of low-pressure drone and a generous oozing of slender feedback, Wrong Signals accelerates the situation. A downpour of gum drops fall from the sky during their hasty, colorful delivery of sound before a blending into the next track. Oh, that’s another awesome thing about this cassette. Each track smoothly transitions from one to the next, with slight overlap, like a fine gradient. So when you find yourself surrounded by the enchanting melodies and compelling vocal supply of Erm & Charlotte (possibly my favorite track here) or buried in the saturated, gurgling fields of Slash’s Wormhole (definitely my favorite artist name here) you’l have breadcrumbs to find your way home. The question is, will you want to go home? Probably not. Proceed!

Don’t fret over becoming disoriented by the divergent buffet that is “The Long Halloween Mixtape”. Give in. Each artist does what they do with immense capability, and this tape deserves a full, devoted listen. The final three tracks sum up it’s sundry of sickness nicely. An excitable demonstration of experimental techno from Son Of Celluloid is the beginning of the end for this comp. Restless beats and vocal sampling morph into the symphony of disfigured seduction that is Reflex Condition’s second contribution “Lullaby Graveyard”. A tough one to explain here. A warm bath of awkwardness? A tormented nap? I don’t know, but I love it, as well as the bubbling synth finale by ModulatorESP. A brilliant ending to a powerful various artist offering.

This is, without a doubt, my favorite cassette compilation of the year. Buy it now.