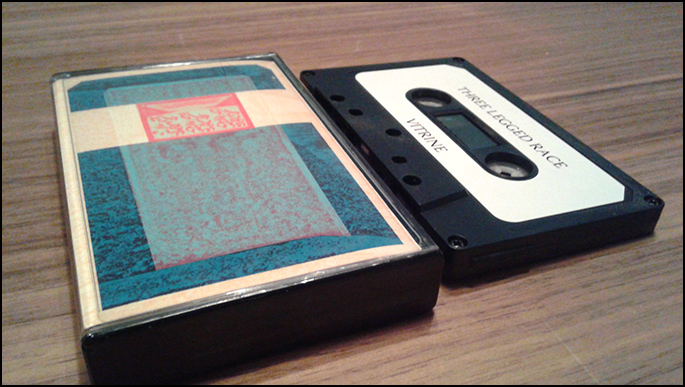 Not so much the sounds from inside a genie’s lamp as the sounds from inside the head of the genie inside a genie’s lamp, “Rope Commercial Vol. 2” by Three Legged Race controls it’s anxiety and crafted jitters with undeterred aplomb. Most could only imagine the thousand-year thoughts of a blue-skinned wish granter, sealed up with nothing but a whole mess of time, waiting for someone to finally give his brass residence a rub down. Robert Beatty (see also: Hair Police) converts them to electronic form then flushes it out the pipes for 20 of the gnarliest minutes you will experience for a while.

Side A starts by Beatty building up a feeling of restlessness by layering insistent loops with squirmy and soaked fidgets of sound that will have you guessing which way is up, but not getting lost in blitz. That time the genie realized it was his birthday, but completely forgot which one. That time those two stoners found his lamp, but instead of rubbing it and setting him free, they just smoked weed out of it. The mosquito outbreak of 1332. All the memories are mapped out over “Ex-Locksmith”, “Oporagen”, and “Equipment”, the three tracks before the flip. “Blossom Oroduct” is just as juicy. Just as loopy. Bassy notes repeat like clockwork, as do a ding-dong doorbell, behind a swelling mist of gurgle. A casual toe-dip into the memory-water before taking the full plunge. The final two tracks on “Rope Commercial Vol. 2” are sort of fucking perfect for the tape. “Empty Timeline” [listen below] has an exhaust of urging electronics and a simple snare while the phrase “Too early, too late. Too volatile to wait” repeats as if that poor ol’ genie has been torturing himself with the phrase since Romanticism. That sad fuck. I just noticed he doesn’t even have a name. Anyway, the tape closes with an ultra-clammy crawl through the bottom of the bottle with “Ill-Use Vocal Score”. Years of mildew polluting the old gleam. Nice.

When all is said and done it’s sorta difficult to believe only 20 minutes have passed, which is a damn good sign. The layout stands out to me as well. The cover comes across as a letterpress design and is super clean, but not clean at all. Does that make a lick of sense? Extra points for putting the length of the cassette on the spine, which I guess is my new favorite thing? I had no clue I even gave a shit either way until seeing this. Bravo, Three Legged Race. Bravo, Vitrine (that’s the label responsible btw). You fuckers killed it.

“Rope Commercial Vol. 2” (which, if you were wondering, is a follow up to “Rope Commercial Vol. 1. A 12″ picture disc available from Underwater Peoples) is limited to 150 hand numbered copies on black cassettes with black and white labels. I can’t actually tell if it’s “out” yet, but it looks like you can grab a copy here, and perhaps soon from TLR’s Bandcamp.