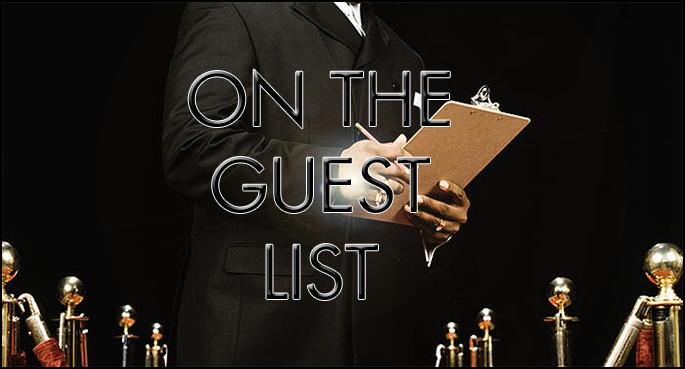 When Tabs Out posted our Top 200 Tapes Of 2013 list it was pretty much the final word on what cassette were worth checking out this year. I don’t think anyone wants to argue that fact. But apparently there are some other people out there with their own opinions (yeah, we don’t get it either??) so we decide to give them a chance to say what they thought about the year in cassettes. We got in touch with a solid cast of heads, people who, in all seriousness, have opinions we think are top notch, and asked them to make some ‘best of’ lists for us. The rules were simple: Each person picked a cassette-based topic (not just their favorite tapes) and came up with a top ten. Most people followed that rule. Some sort of followed it. Seth Graham didn’t even try.

Our hope is that these lists will do two things. 1) Help you (and us) find awesome sounds that we missed out on this year. Because even if you pay attention 25/8 crazy good stuff is going to slip through the cracks. And 2) Try to put on display that year end lists are supposed to be fun. A lot of hate gets thrown the way of year end lists, which makes no sense. Nobody who gets ‘best of’ this or ‘top that’ on these things is entitled to anything. They aren’t literally “THE BEST” now simply because they have  a #1 in front of their name. Medals aren’t being awarded, shrines aren’t being built, tax-free status isn’t being implemented for their next fiscal year. Behind all of these lists are just people who don’t get outside enough telling you what they like. That’s all. And this insufferable whining about lists coming out before the entire year is officially over. For the love of  1980’s Bill Murray, who gives a Ghostbusting fuck!? “Oh no, a good album was released on December 13th, but it wont be on the lists! THE LISTS!?! Ooooh, I’m getting the vapors!” You still get to listen to the fucking thing. Hey, remember the top record on that Pitchfork Best 50 of 2008? Yeah, nobody else does either, so crush a chill pill and snort it before it’s too late.

Brian runs the blog Guide Me Little Tape where he reviews music mostly on cassette, so releases from a broad variety of labels crossed his path this year. He also started up the extremely promising Horror Fiction Tapes. He went over his top ten favorite cassette labels of 2013 for us. 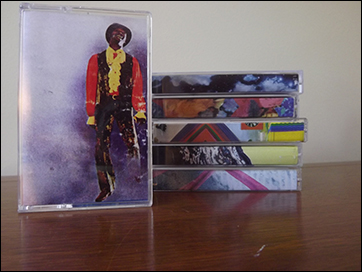 For me, this was the year of Rotifer.  The lush collage hypnotics, the attention to detail and miniature liner notes, the unique artist selection.  I almost have everything from Rotifer this year (some of it buried and not pictured, some I swapped), and there isn’t a miss.  In a scene filled with delicate ambience, Rotifer curated a 2013 catalogue that twisted those ambient planes into a kaleidoscope version of a shaman dance party.  A beat tape remix of everything I loved in the last 3 years of tapes, reworked and presented back to me in a way I didn’t even know I wanted.  Although I guess for a label with an album count in the 80’s you’d expect something really great, and it is.  And maybe what I like best, is that it still feels DIY as can be.  No overwrought website, no Bandcamp page, just the occasional sale posted in plain text.  Must haves would sound something like Paul Hares, Nag Dolly, LateLateLateNight, and Paul Hares again.

Digitalis‘ Brad Rose is one of the most active fellas around with a laundry list of activity that could make one’s head spin. It’s nearly impossible to keep up with the man, but you can at least try. With that said, here is Brad’s list of bands and projects he thinks should release more cassettes in 2014 than they did in 2013. (You just can’t please him)

1. Roe Enney
Ever since Phaserprone released Roe Enney’s “Damnatio Memoriae” in 2011, I’ve been waiting for the next chapter.  That tape remains one of the best cassettes I’ve heard in the past five years and is one I return to over and over.  With a sort of cryptic air surrounding it and the near-silence since (there was a split cassingle on Discriminate with yours truly), it only adds to the intrigue and anticipation of what will be next.  At least, I hope there is something next (if only a vinyl reissue of Damnatio Memoriae or something!).

Experimental music is loaded with ladies but can sometimes seem like a total pickle jar, which is sort of like a sausage party but there aren’t any chips. Shit, take these lists for example. Seven contributors and not a uterus in the bunch. Even this list that focuses on women is by someone named SugarMAN. Sheesh. I asked Mike, who’s an editor over at Ad Hoc, to do this topic, and even though he said that “categorizing tapes based on gender is dubious as fuck” he obliged. More than ten female humans made tapes this year, but these are his favorites.

1. V/A “Taxidermy Of Unicorns (Watery Starve)
Holy heck, this is a sneaky choice because this is not one tape, but two. Taxidermy of Unicorns features a total of four people. It’s as devious as saying my favorite food is a Bento Box. Well sue me! The music here is great and this endeavor is topically apt. Lynn Fister put this one together through her tape label/series of art objects, Watery Starve, with the intent of showing solidarity amongst the ladies of the global drone community. She chose four artists (herself included) who are some of the absolute heavies of contemporary ambient, three of which (herself included) who are guiding curatorial forces behind top-notch labels. As Aloonaluna, Fister submitted the side with the beats, providing an eloquent counterpoint to Motion Sickness of Time Travel’s abstract synthesis on the flip-side. This happened to be Rachel Evans’s best work this year. The other tape is shared between New Zealand’s Birds of Passage and Belgium’s Je Suis Le Petit Chevalier. Alicia Merz did her usual thing and used the Birds of Passage project to make the prettiest music on the block. This was Felicia Atkinson’s earliest work as Je Suis Le Petit Chevalier in 2013, and she had a good year with both her musical output and her label Shelter Press. Taxidermy of Unicorns also wins the 2013 award for Best Concrete Imagery In A Title.

Being one half of the duo Afterlife, and the man behind Tranquility Tapes (who released the “Duets” cassette comp last year, and it’s follow up “Duets II” this year), Franklin Teagle appropriately runs down his favorite cassettes this year by dynamic duos.

The Honest Bagger runs the mega-chill blog The Honest Bag where he talks about his favorite current cassette releases, pairing them with some wacky tabacky. It’s like a peanutbutter & jelly sandwich, but far more tranquil. Keeping with that level of relaxitude, The Bagger rounded up his top ten tapes from the year to utilize for deep listening and meditation.

1. Kyle Landstra “Sage’ (Cosmic Winnetou)
What is left to say about this gem of a tape, and the label on which it appears. Sage infused my life with serenity and calmness during trying times. Therefore, it has stood the test of time and sits cozily in the Honest Bag healing kit. All of Kyle’s work is great, yet this one holds a special spot in my heart. Kyle is extremely adept at creating and sculpting a warm, vivid environment. And, that is immediately presented to the listener upon pressing the play button on Sage, the most recent release by Kyle on the glistening Cosmic Winnetou – one of the best labels around. It’s tantamount to the dawn of a new day, that feeling one sometimes has as they open their eyes and hope to realize the inherent beauty of the day. I remember being bathed in the radiance of Sage during the dark, freezing night. From the speakers poured forth glimmering, breathing soundscapes that illuminated the room. This is a tape in which I place my trust. It’s fealty is unquestioned, while it’s sonic healing power is nearly unrivaled. Sage is the stream of next-level paeans to mollify your ills and the fuel for one’s ascent, begetting healing, heightened awareness, tranquility and lucidity.

Lars works for NPR Music where he does, to be specific, “a lot of things”. Even though thousands upon thousands of cassettes were released in 2013, Mr. Gotrich combed through the discs, digital files, and records and came up with a list of jamz he thinks should have been spooled round and round. As he put it “Why waste a perfectly good gurgle on 1s and 0s when it could dubbed and worn down by a thrift store Walkman running low on double As”? Here is his top releases that should’ve been released on cassette. 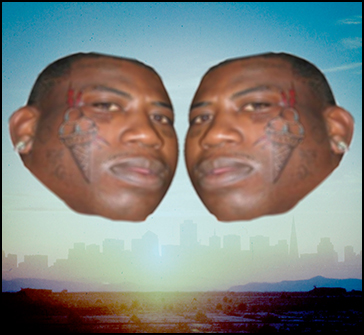 Let’s be real here, this is the Boards of Canada album we needed in 2013. BOC’s woozy junk getting all snuggly with everyone’s favorite ice cream cone tattoo enthusiast (and 2013 mixtape champ) Gucci Mane. IS YOU ROLLIN’

Seth Graham is 50% of the humans behind the amazing cassette slingers Orange Milk Records and the whacked-out duo Cream Juice, easily our favorite label and group from 2013. I got in touch with Seth, asking for a list for this thing, and in return he submitted (last I might add) some nonsense about Chicken Sausage or something? At least one release on his top ten is from 2012 and one was a CDr/digital-only release. That’s the way she goes, boys. The fuckin’ way she goes.

1. Scammers – Phillip Glasscandy (Closet God)|
So I fucking LOVE Phillip Glass, and some lo fi crooner shit over his music is a great idea. It sounds to me as if there were a quiet character in Trailer Park Boys who produces J Roc. This phantom producer inspired by Bowie, and a newly found Glassworks record, decides to make a record. I make a lot of sausage and eggs with raspberry jam and eat it while I watch TPB, which joy is equivalent to listening to this solid release. Also fucking Phil never sent me the tape even though I ordered it a while ago, so Phil, fucking send me the tape! JESUS!