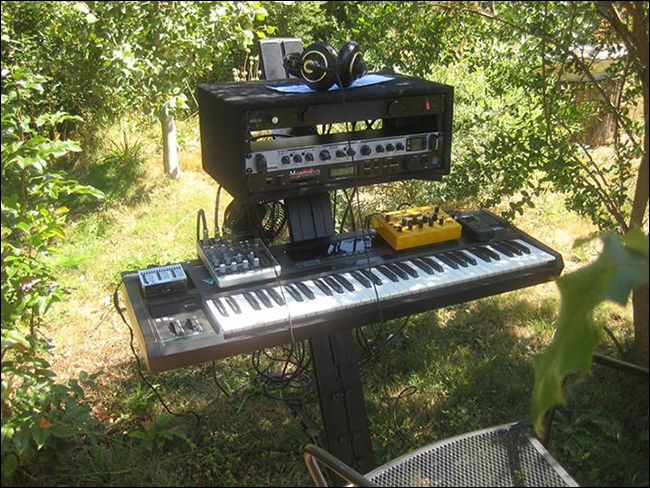 Portland based synthesizer obsessor Daryl Groetsch, aka Pulse Emitter, toted his gear into his backyard last August for an outdoor session. The resulting hours worth of material will be released soon via the Cosmic Winnetou imprint as the fittingly titled “Outdoor Session” cassette.

This was the first time Pulse Emitter recorded outside, an idea that he got from Guenter Schlienz, who runs Cosmic Winnetou, when Schlienz was crashing at his house while on tour . “It was very inspirational. It’s normal I guess for an acoustic musician to take their stuff outside but not so much for electronic musicians”. Groetsch said about the jam. “Guenter does this himself a lot, he told me he recorded at a beach in southern France I believe and it informed the way he plays in a major way. He encouraged me to try it. I had actually played an outdoor fest right around the same time and got a taste of it then. Something about seeing the sky and plants while playing is good. The music was improvised using a setup that has become my new favorite way of playing, I’ve done more (inside) recordings in this style since. Playing outside is definitely different with the sun beating down on you and your instruments, and ants crawling over everything, and flying insects, but it’s all part of the experience”.

“Outdoor Session” will be part of a three-tape batch along with Flamingo Creatures and Raising Holy Sparks. Some samples from the Pulse Emitter’s C60 recording, consisting of an Ensoniq VFX-SD, E-mu Morpheus, ARPIE, DSI Mopho, and TC Electronics M300, can be heard below.