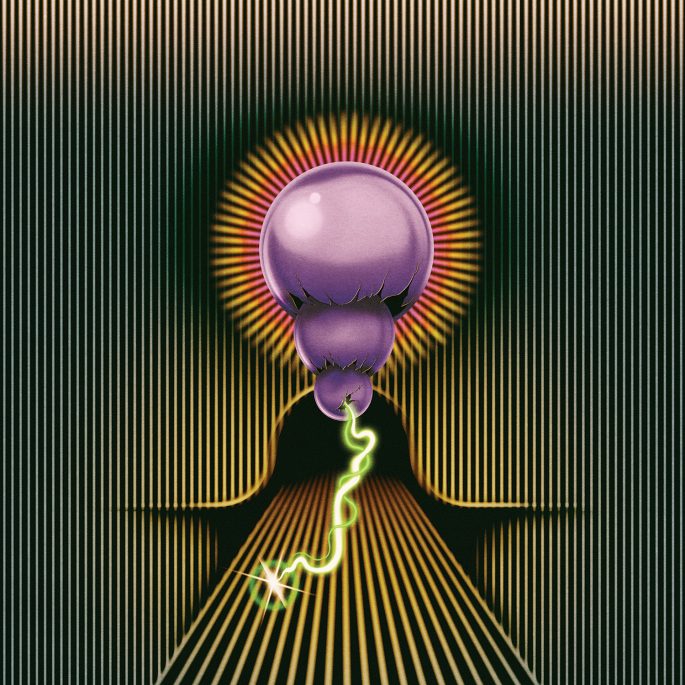 I played a house show in Emmaus, Pennsylvania, a town south of Allentown, back in 2008 with A Snake In The Garden and Oak, who were on tour together. A Snake In The Garden was a friendly-violent type of project that Mattew Mayer did at the time. Oak was an ultra-chill unit featuring Toby Aronson. The two had just started NNA Tapes and had copies of their first dubs with them, which I quickly gripped. Two splits: Sun Circle / Pregnant Moon (NNA001) and Oak / Pink Desert (NNA003) [picked up NNA002 Duane Pitre – For Loud / For Quiet C30 later I believe]

The tapes looked incredible, with that now infamous folded-circle artwork and hand painted shell labels. It was a definitive “new new age” zone. This was the a peak of hunched-over-on-the-floor-drone and the artists provided quite possible the most relaxed vibes you could hope for. It was like listening to salt lamps melt. NNA followed up that meditative mind drift by releasing one of the best tapes the following year, a split between Caboladies and Oneohtrix Point Never. The split drank a ton more V8 than the catalog up to this point, spiderwebbing NNA’s reach into endless depths.

In 2010 NNA had entered non-stop mode, releasing stacks upon stacks of the most critical sounds and sights. Xiphiidae, Pulse Emitter, Nonhorse, Julia Holter, Hobo Cubes, Driphouse, and an 8 tape box set highlighting the Burlington, VT experimental scene. An EIGHT tape box set! How can they top that you might wonder? I mean, NNA has been a bull in a cassette shop for a decade now. I don’t want to say they are “the best,” because that can’t be quantified, but they are the best. Jason Lescalleet, Astral Social Club, Dog Lady, Golden Retriever. These are the kind of tapes they released, people. Dolphins Into The Future, Drainolith, Quicksails, Max Eilbacher. I could do this. All. Day. Long.

So, while NNA had nothing to prove to you, here we are. At ten years and 100 releases. Here we are with “Centennial.”

The full lineup is as follows…

You ready to do this? Preorders are up now with an official release date of 8.17.18.