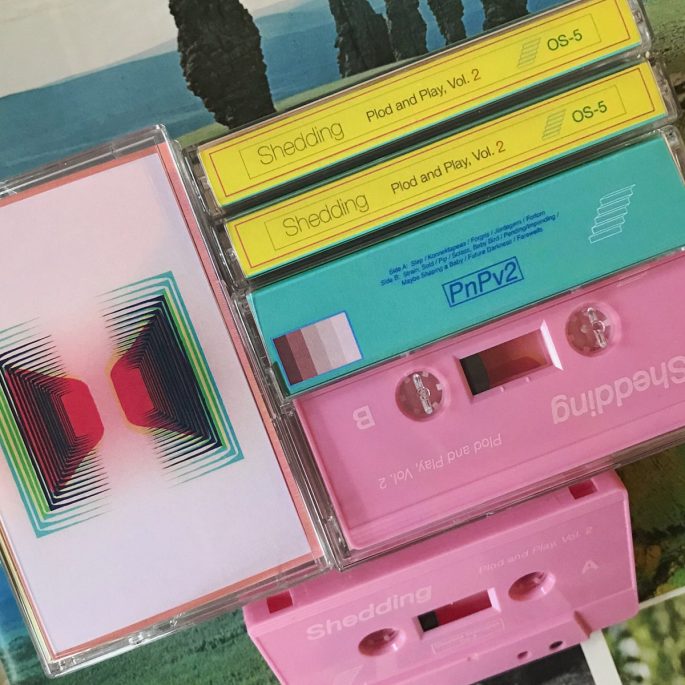 -Kramer and the Librarian, in “The Library“

My goodness what I would give for Kramer to BURST into my house while listening to Shedding’s “Plod and Play, Vol.2” on Obsolete Staircase. We’d probably start off with a classic back and forth about what an obsolete staircase could possibly be. That would naturally segue to his plans for levels (you know, like ancient Egypt). But the award winning chatter would come when I was asked what tape was playing…

We’d have so many freakin’ laughs, us two, but Kramer would have made a decent point. “Plod and Play, Vol.2” is a god damn, full-on cornucopia of bells! An errant gravy of small to tall, softly hewed, and slightly rusty bells that make magic *pops* and deeeeep doooooown *plooooooms* with crypto precision. Oh how they plod and play! Shedding shows no shortage when it comes to bells – There are bushy-tailed ones, straight out of the factory, yet to experience stress or strain. With swagger they go by church steeples, pointing and giggling as they sound off with their perky byte-sized bursts. Clunky old timers show up, too. All stout and tired. They mostly make dusty echos and pretend that their flaccid clappers are capable of more than barely chafing their mouths. It’s pathetic to witness, but makes for an excellent backdrop of sound. I think the Liberty Bell even makes an appearance towards the last few minutes of each side. Poor bastard.

The bells may not be real bells, but the tones are, and they’re spectacular. Connor Bell puts these tones through impressive drills. I don’t think Seinfeld ever did an episode about bells, but if they ever do – “Plod and Play, Vol.2” should replace the between-scenes music. Go get a copy!!