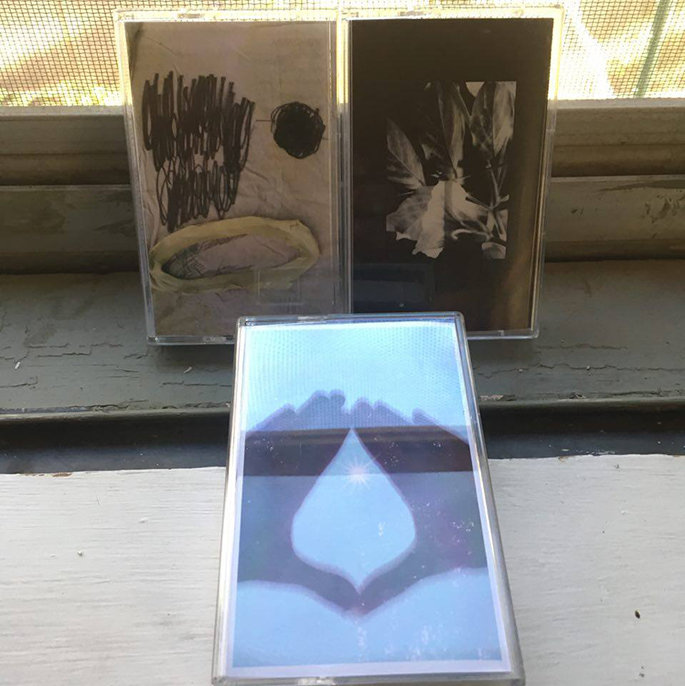 Time has flown by this spring, and the latest batch from Heavy Mess has been a constant companion of mine, with a sound for every occasion. Last year’s debut releases from this label tended to be on the mellow side of the listening spectrum, but this latest trio of tapes gets more assertive while maintaining a fresh curatorial sensibility. And according to their Bandcamp page, Heavy Mess is a “discrete” cassette label, which I think means that they’ll ship these analog beauties to your house in an unmarked manila envelope–wait, that’s “discreet.” It means they’re a label of individual and distinct tastes, which even a cursory spin of these tapes will capably back up. Let’s dig in:

Inner Islands proprietor Sean Conrad works under several different project names, including Channelers and Orra, but no matter the band name on the cover, you can count on an energizing, rejuvenating experience. His Ashan project is is rapidly becoming my favorite, though, harnessing the considerable mass of heavy guitar work to bring some serious volume to meditative ends. Conrad essentially becomes a one-man band for Ashan, using drums, vocals, and synths along with guitars to create a pair of gentle giants. “Fulfilling the Promise Absolute” is a short album, but both of its 10-minute sides feel much longer than their running times reveal, like Godspeed compositions aimed at uplifting, Voordoms-era Boredoms ecstasy. Be sure to check out last year’s “Death is the New Life,” too, which is also still available from Heavy Mess.

Randall Taylor is a prolific jammer, having dropped over a dozen great tapes on a variety of labels in the last few years. His Amulets project uses a variety of sonic approaches, including tape loops, field recordings, guitars, and circuit-bending gadgetry to build melancholy vistas that always sound great left on repeat. Like “Fulfilling the Promise Absolute,” his “Still Lifes” for Heavy Mess is an EP-length affair that feels more substantial than its length. The pair of pieces here are somewhat minimal compared to some of the more layered Amulets recordings, and guitars dominate these mixes. And what beautiful guitars they are: clean tones are looped and reversed, turning into delicate pads that are eventually overtaken with overdrive. There is a certain delicate quality apparent in these pieces, highlighted by the distorted swells that overwhelm the mix toward the end of “A Library of Flowers,” but they walk a kind of compositional tightrope that finds inner strength from their own fragility.

Somewhat removed from the more contemplative stylings of her peers in this Heavy Mess batch, there are no maps to safely navigate through the world of Gina Probst’s Macho Blush project. Some urban readers may not be familiar with the tradition of snipe hunting, but around my part of the rural Great Plains, your friends might drive you to a remote wooded area in the dead of night, hand you a large cloth sack, and explain how they’re going to flush the legendary snipe out of hiding with their car headlights, causing a gaggle of snipe to flee right into your outstretched sack. Then they drive back into town without you, and you’re left holding the bag, quite literally, with a long, dark walk ahead of you. You may feel like a snipe hunter during the first few confrontational minutes of “Moodshow,’ but by the end, your bag is overflowing with more fantastic creatures of the night than your friends could ever imagine, and you don’t have any pressing reason to leave the woods any more.

Macho Blush is often described as “outsider music,” and it does mirror the attributes folks might expect in outsider sounds. At times “Moodshow” is brutally low-fi, with recording levels pushed well beyond the red, and the vocal lines are bizarre and jarring, and the music lurches between styles and volume levels without warning. But the more time ones spends with this music, it’s clear that Probst is incredibly deliberate in her composition and performance, applying the weirdness of early Ralph Records and the savagery of no-wave bands with surgical precision. Percussion and delirious vocals dominate most of “Moodshow,” but occasional piano flourishes reveal a fine-tuned musical mind willing to use any tool at her disposal to lure us into a unique world of ritualized sound. One of the best albums you’re likely to hear this year.

All three tapes are still ready to meet your Paypal account. Head over to the Heavy Mess Bandcamp and get yourself messy.