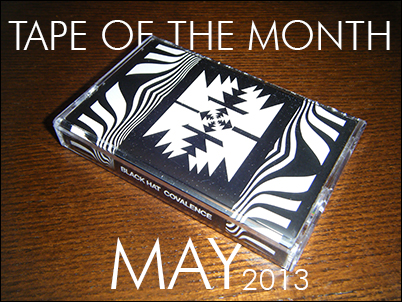 I lika’ the Field Hymns. Admittedly I discovered the Portland, Oregon imprint somewhat late in the game, the first nugget I heard being the Bastian Void “Fluorescent Bells” (FH029) cassette from last year that easily gripped the numero uno slot in our Top 25 of 2012 list. Since then I’ve kept tabs on (pun sadly intended. sorry) the label run by Dylan McConnell (aka Adderall Canyonly). Consistency is the name of the game here. Jonathan James Carr, Nodolby, Oxykitten, Grapefruit, Zac Nelson, and Boron, among many others have seen releases on FH. Some names I knew, some jumped completely out of left field for me, but the material and presentation of them all was remarkable and uniquely Field Hymnian. It was quite a pleasant surprise to find three new jams from the label show up in the Tabs Out mail room from Cremator, PLVS VLTRA, and what turned out to be May’s tape of the month, Black Hat. 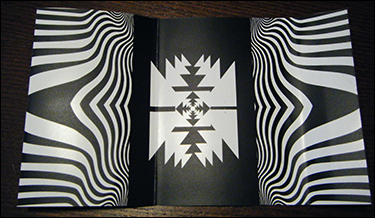 Nothing would bring me more pleasure to say that Black Hat is the solo project of Mr. Bean and leave it at that. But in the spirit of responsible journalism, and to avoid sending a ripple of confusion throughout the sea of Rowan Atkinson fanatics, I shall elaborate. Black Hat is the solo project of Nelson Bean from either Seattle, Washington or Oakland, California depending on your source. Besides a sold-out C30 on Debacle Records called “Spectral Disorder”, this appears to be Beans sole release. And it, my friend, is quite the ripper. A five-and-a-half minute percussive dark-shredder called “Ashe” kicks the “Covalence” party off with menacing thumps and an industrial-jungle of sound-sheets. Each throb, every shrill blast is an awesomely calculated penetration of sound that would make Einstürzende Neubauten break me off a piece of that Kit Kat Bar. After 66 seconds of what might possibly be conch shells and/or didgeridoos (I’m not exactly sure, but it definitely sounds like Ewok victory music) Black Hat finishes off side A with an uber-whimsical rain forest meditation called “Jaune”. The microscopic, friable details poured over the seven minutes is so thick I highly recommend busting out the headphones and zoning out. It’s a deep zone. Side B immediately cruises things back up to a ten on the broodingly hypnotic scale (BHS) with the unyielding pulse of “The Lattice And Cormorant”. Remember the veiny boss in the final stage of Contra for NES? Well, I’m thinking Nelson Bean managed to mic that thing in the final moments before it’s demise for this jam. The stand out cut on “Covalence” (and that is saying something) is the closer. “Singing Point” brings together all of the audio membranes laid out during the previous 20-some minutes; the mesmeric beats, the dustings of sound that are equally as primal as they are futuristic, the ominous sweeps of drone. All working together to create a 6-minute empyrean-dub baby sitter for your brain. It’s a rad tape. Did I mention that?

The visual aesthetics are also exquisite. Most (or possibly all?) of the artwork for Field Hymns releases are done by the main Field-Man Dylan McConnell who designs insanely brutal looking stuff under the name Tiny Little Hammers. His shit is way tight. The two panel Jcard here is black and white and printed on a glossy stock that gives the image a pretty sweet shine. A geometric, slightly Aztec-inspired obelisk of triangles if floating on the cover between wavy lines like it’s about to shoot through a black hole. That image is repeated on the inside of the cover and both sides of the cassette shell, imprinted purple on purple. The Field Hymns cobra logo is on the back flap along with hand numbering out of 100 in silver ink. Black ink is used inside to denote the digital download code, which is handed out with every Field Hymns release (sweet touch).

Black Hat “Covalence” C30, and many other excellent releases, are available from Field Hymns for $6.00. Sound samples are abound, so click this link and dig in.