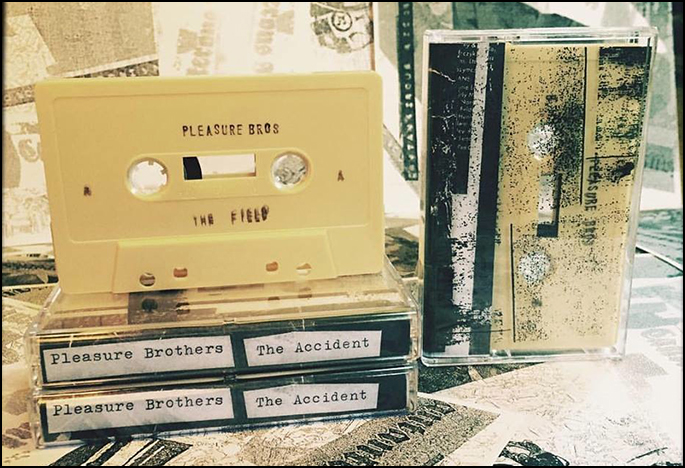 According to Cantankerous Records’ website, Pleasure Brothers is the defunct moniker for Sydney, Australia’s Tony McKey, who specializes in a very peculiar sort of nauseating minimal tape loop action that calls to mind the more minimal elements of Dog Lady Island and Aaron Dilloway. Side B of “The Accident” drags your ears through the muck of tape slowly shedding its magnesium oxide, shedding its fur and flesh slowly as air is compressed into the engine room and parts.

A shining example of constant motion becoming non-movement over the course of 20 minutes of hypnosis. Small metal spheres are hovering in a white room, moving in small circles around a room that is full of light, the capstans dragging on the reels increasingly with each painful repetition, a machine that will eventually self-destruct. The performer has left the mechanisms to their own eventual destruction, but not before they wear down their gears in the process of pointless labor. The machine plays itself with as little guidance from the operator as possible, and a state of eternal entropy emerges. All movement becomes non-movement. There is no “same moment” in a state of total repetition where things slowly melt into the background or vise versa. The interaction of near -static constant tones and rumbling gear-like movements are corroding viscosity of the machine and my earlobes. Left me wanting more.

Which is great, since a copy of another recent PB release on Altered States Tapes, “Ecstasy”, came in the same package. This tape sounded a lot closer to what I’d heard on their release on Mazurka Editions a couple of years ago; slow-moving formations of confusion and oxide degradation coupled with a pervasive humming undertone that freezes your blood with a chill of the eternal decay that is life and death. More of the same on side B. Pleasure Brothers are the Lungfish of the modern tape loop scene. The same song being played over and over… Damn, its a good song, though. No answers. Modern minimal excellence in tape saturation and (de)composition that deserves your attention.

“The Accident” C26 is an edition of 30 and available from Cantankerous. You’ll have to do some hunting for a physical copy of “Ecstasy” or settle for a digital grip.