Let’s All Chill The Fuck Out (And Stop Bashing Cassettes)
12.25.15 by Ross Devlin 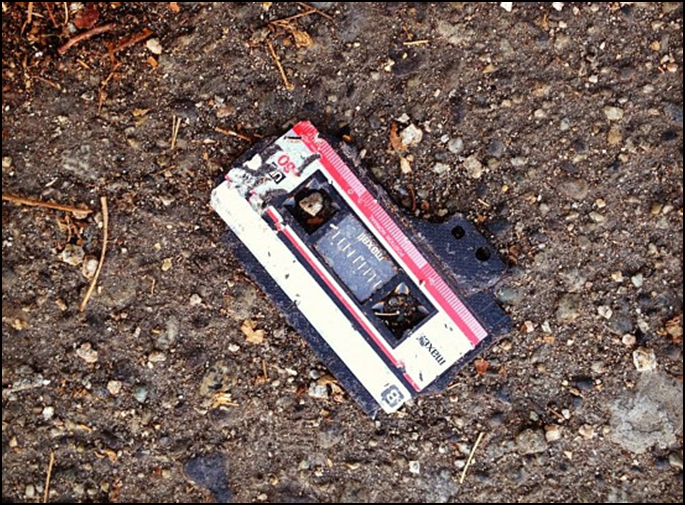 Writers all have axes to grind. We are fickle, neurotic creatures full of pent-up rage we exorcise through our fingertips. We control every quark of our cultivated universes – the beautiful byproducts of poorly-cased brains with terrible replay quality, prone to scrambling information, skipping, and rendered useless underwater for too long – and that should be enough. Occasionally, though, when lacking creative juice, or attention, some writerly folk succumb to the temptation to lash out at –stuff-. Yes, there is nothing quite so satisfying as hurling insults at that which cannot insult you back. Rants about stuff can be aimed at anything gaining in popularity with any group of (young) people. Especially fair game are things that don’t immediately make our lives more convenient, because anyone who isn’t maximizing their biological efficiency by chugging soylent and churning out #ideations is missing the point of life, right?

Specimen A: this recently published op-ed, snuck up the ass of the New York Times, is not happy with recent resurgence in cassettes. Why? Who knows. Maybe their verisimilitude article published in 2010 didn’t land messily enough. This time around, it’s a vitriolic knee-jerk of a column that reads like a fistful of Ritalin, and it serves no other purpose than to showcase said writer’s skill at mashing together similes with childlike glee, scattering the pieces across the floor and cackling as the rest of us lacerate our feet on the pieces. Many more articles have come before this, written by opinionators who come off as hopelessly out of touch in their efforts to stifle trends. Other publications take a more sympathetic approach. All miss the mark completely. I’ll sum up every single one: cassettes are obsolete; cassettes are pretentious; you are a hipster.

The offending NYT author substitutes knowledge about music for dad jokes and cliché selective memory bias. He opens with a comment about Nelly Furtado using the format (for a special, limited edition), which seems consistent, until it is followed by a remark on how cassettes have seemingly “swapped fates” with Seal, not realizing the same Seal has sold over 10 million more albums than Furtado, and is very much still around and producing albums, if only in Chechnya. This same author also takes stabs at a tape’s perceived audio impurities, ignorant of the importance fractured tape loops played in shaping minimalist classical music and, ultimately, sampling as a reappropriation of audio. Not to mention one of the most influential and historically important compositions of all time erupted organically from tape decay – It was worthy of a performance remembering the 10th anniversary of 9/11, and could very well be played at the 20th, and 50th anniversaries as well.

Regardless, it’s time to set the record straight: tapes aren’t back because of “sentiment.” They are back (if they went anywhere at all) because, like all things, they fill a niche. Nelly Furtado’s 20 million records doesn’t automatically flick the tape game into the “on” position. That’s called a marketing gimmick. If one wants to understand why tapes are appearing in the public consciousness, it will help to look at where they are useful. But first, let’s drop the hypocritical rhetoric of cassette sounding “bad”. You can’t tell the difference, son. MP3’s bought on iTunes or converted from CD (or put through a Youtube Converter sound composting unit) are compressed at substantially lower audio quality to cassettes. Streaming with Pandora or Spotify is even worse. And cassettes are by no means a “terrible technology” – they withstand heat, cold, shock, time, and greasy fingers much better than CDs, vinyl records, or binary file formats. They are the most high-density storage devices on Earth, so far, which is why they are still widely employed for archiving purposes. Floppy disks became obsolete because they held 1.2 megabytes. That’s about a single PDF. Sony recently developed a cassette that holds 185 terabytes, which is equivalent to the entire Library of Congress 18 times over.

So why are cassettes around to stay? And why should Gen-X’ers and trendphobes quit whining? Well, for starters, music has been dealt quite a few blows below the belt in the 21st Century. No longer are “compositions” made by “artists,” for “listeners,” subsequently discussed, analyzed, emulated, and improved upon. Now we have “hooks” engineered by “producers” (Somebody, please, I’m begging you, give me one good reason why a song needs to have upwards of ten writers in its credits.) for “users” in an oversaturated market. Genres emerge and re-emerge in a permanent echo chamber of maximalist cacophony, all geared towards squeezing profit for a malnourished, dinosaur industry. Maximum dopamine, maximum complacency. Artists – as in the people who create thoughts using imagination, and translate those thoughts into communicable media – have combatted the deterioration of the music industry themselves, by using that icky quality known as independent thought.

Both vinyl and tapes are successful attempts to create a more meaningful connection between the listener and the artist. Limited runs of vinyl records have become collectors items, and are a hit with techno, punk, indie, and classic horror movie soundtrack fans. Tapes have experienced similar success with experimental labels and noise houses. Just look at the beautiful pieces curated by Auris Apothecary, No Kings, A Giant Fern, Phinery, 905 Tapes, Geographic North, Patient Sounds… the list is very near endless. The barriers to entry for the industry are near zero, and with a keen eye for detail and design, the chances of breaking even on a releases and ensuring future endeavors with new artists is palpable. A hand-numbered edition of 30, 45, 100 cassettes is a significant product in a consumerist world that values a user’s response to a product more than the product itself. A physical releases gives artists a sense of legitimacy. In every case, it is a collaborative effort – a DIY, family affair, born not from industry competition, but from a desire to physically record every creative impulse every musician/producer/composer has ever had. Cassettes are being duplicated by some of the most acclaimed avant artists of the year, sometimes in between LPs, sometimes in addition to them. In many cases, gripping a tape is like finding the notebook of a mad genius on the subway and marveling at its contents.

Bottom line, cassette culture is not about your dopey baby fingers unspooling tape in a rear-facing carseat. Above all, it is not about the fucking mixtape you gave your girlfriend once. It isn’t even a “resurgence” – this is about music, not extreme religious fundamentalists. Hating on the recycling of technology is a surefire way to get labeled as a curmudgeon pining for clicks. Casual commentators on the relevancy in “obsolete” musical formats never used these formats because they cared about what was contained inside – they passively consumed along with the rest of society, and passively adopted the next technological change to come along based on some arbitrary, externally assessed improvement. With vinyl to cassettes, it was called “portability.” Cassettes to discs, it was audio quality. CDs to MP3’s, it was called “convenience,” and “sharing.” Mp3’s to cloud-based streaming, you were finally convinced you didn’t even need your own personal archive anymore, as long as you have a wifi connection. When pressed, no one would admit they prefer any format to the sound of a real, live instrument. It all comes down to economic conditions and accessibility. How can you hate on something that costs less than $10? That’s cheaper than chocolate. Maybe one day in the future, when physical music is still taking flack from dudes with solid state drives hardwired into their brains, we can finally say the conflict of formats is all in your head.