Wow. We were only FOUR days into the year before Constellation Tatsu, the most “lawful good” ambient tape label, decided to hit the triple tape batch button. Now I’ve been behind on my C.Tatsu releases, although my eyes quickly lit up at this batch for one reason or another. The trio they’ve assembled maybe carry a little more swagger than usual? I couldn’t say. But onwards to the batch.

We love a good tape loop, don’t we folks? Preferably one set for the witching hour battle with the reaper, as much as when you need to turn the garage into your own full-fledged chillout room. Julia and Nico, an ocean separated from each other, have become remote collaborators over the past two years. Paisajes Imaginarios follows 2020’s Distant Fields, chipping back at the previous EPs emphasis on mending classical styles and digital ambience for greater focus on the piano as an ambient stalwart. The 8 compositions are fluid, relaxed distillations of this MO at work. Sometimes it leans towards the graceful and somber (Anillos & Atlantis), while at other moments there’s a bubbly jubilance piping through (Gaura).

I’d be lying if I didn’t say I’m kinda shocked that this one exists so soon after the 100% Silk excursion from last fall, Floating Mountains. It was here where I was introduced to Takeda’s world of 90s electronic gear that begets slick, vapor-tinged house for the ambient; the limits indeed led to a pretty limitless dreamland. That release had a real notable bass presence that Same Place, Another Time ebbs more conservatively within its six compositions. Tracks are slower, a little more spread thin, with the synths and drums slowly shrugging along. Even if its not as forceful though, there’s still a wistful want to nod your head and reflect. Takeda alluded to the tape being used to conjure “photographs and magazines of locations that have been lost with the passage of time;” although methinks it is still a lost N64 cartridge first and foremost. “Analog Photograph” and the title track are strong sonic showcases here of this more limited approach.

The bass I’d been savoring arrives here on Alex Albrecht’s Resolve. Over six pieces, Albrecht tinkers with quiet, improvisational ambient and field recordings. Low-level listening at its finest, casually acting as a parallel summation of the three tapes in this batch’s finest sounds. It’s not a full-fledged seamless listen, although its pacing is genuinely organic, begetting sparse spaces that you don’t just wander through as much as eavesdrop through like an airy mist. In the tape’s strongest moment, on “The Chamber”, Albrecht achieves a campfire-esque dub, laying down rattling drum patterns that skip like stones.

With some help from More Eaze we tried to turn cassette tapes into cold hard cash.

Eamon from Strategic Tape Reserve stopped by to brainstorm future releases with us, explain what exactly STR is, and attempt to prove that he can be trusted (he can’t be). Features Fire-Toolz, Phirnis, Fitness Instruktör, Qualchan., Severino Pfifferling, Modus Pony, VLK, moduS ponY, and Elymr.

We tried to interview Aaron Dilloway of Hanson Records but he mainly just walked around his house and showed us tapes. It was an honor and a pleasure.

Claire Rousay, Keith Rankin & Seth Graham (Orange Milk Records), Max Allison (Hausu Mountain), PK (German Army), and a few more buds stop by Tabs Out virtual HQ to talk about their favorite tapes of 2020 and wrap this ghoul of a year up.

Nick Langley pops in to discuss some of the often confusing releases on his label with cuts from Nikmis, EQ Why, Stuart Chalmers, and others.

Ben from Cudighi Records hangs out!

In an effort to educate and organize the people, Jamie Orlando offers up some tips for Discogs.

Bonus Episode: Going Through the Mail

The bonus brigade catches up on the ever growing pile of mail stacking up at Tabs Out HQ. 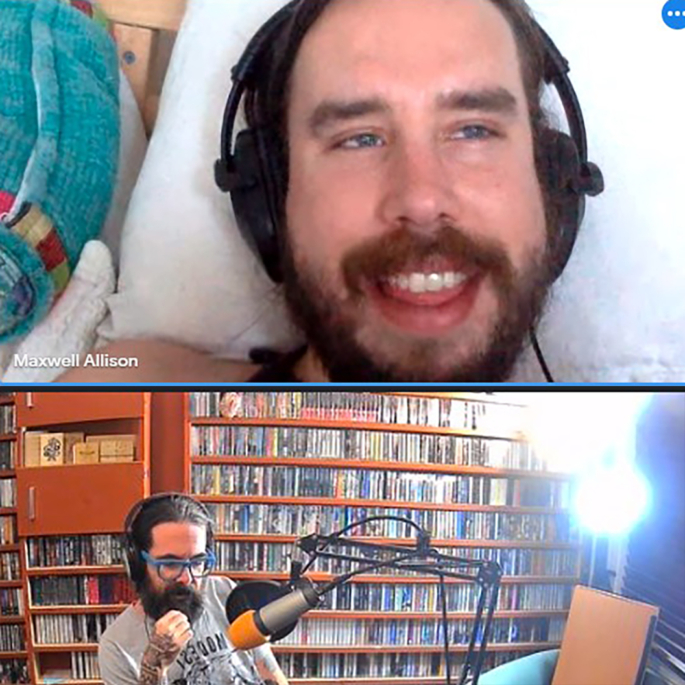